Julie McQueen found her way into the hunting industry as a pro staffer back before any other girl had even tried. Even before that she made a name for herself in the fashion industry by working in Los Angeles, New York, and all over Europe. She just might be the only woman to fly from a photo shoot in France, land in the U.S., and climb directly into a tree stand. Her trophy collection speaks for itself, but she isn’t doing this to prove a point or to try to compete with the boys. She hunts simply because she loves it. She’s the host of "Brotherhood Outdoors" with her husband Daniel Lee Martin, which begins airing on Sportsman Channel in January 2015. Julie and Daniel Lee motivate and inspire each other to work towards a common goal with their production company, Backstage & Backroads. Both are into maintaining a fit lifestyle to keep up with the high demand of their jobs, which involves lugging cameras over mountains to film that perfect shot. Learn more about America’s outdoor couple at Backstage & Backroads.

Healthy Choices: How to Stay Healthy in Hunting Camp

Julie McQueen for Exercise & Workouts
Some of the best meals I’ve ever had were at hunting camp.  Whether we have the luxury of a full kitchen or are working… 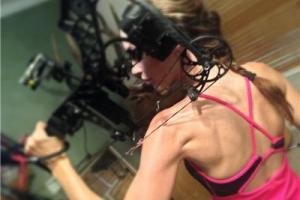 Julie McQueen for Exercise & Workouts
We spend countless hours — and much of our paychecks — on outdoor activities like hunting and fishing. So when we get…
END_OF_DOCUMENT_TOKEN_TO_BE_REPLACED