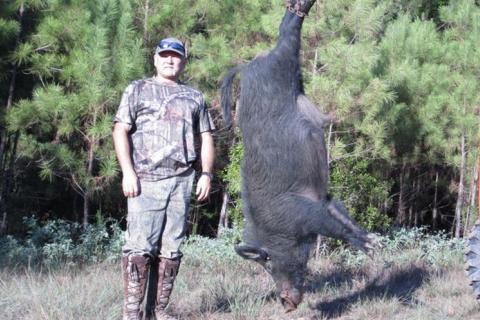 Hog hunting is one of the fastest growing segments of the hunting world. If you've been hearing about it and have been thinking about it, here's why you need to get out there and start doing it now.

Tip: 4 Surefire Signs You Have a Feral Hog Problem

Whether you call them wild hogs or feral pigs, it's no secret that the population of these critters has literally exploded in many parts of the northern, southern and southeastern United States over the last few years.

That about 7 million of these porkers are now roaming the U.S., with about half of them calling Texas home. Feral hogs are extremely prolific, with sows often having more than one litter per year, with up to 10 piglets per litter. That adds up quickly, and they are constantly expanding their range, including northward. It's basically the equivalent of the Asian carp epidemic that is plaguing much of America's waterways.

2. One of the Most Destructive Invasive Species in the United States

This population explosion is wreaking havoc on landowners and their properties. Hogs feed by rooting up the earth in search of mushrooms, roots, bugs, rodents, etc. This rooting action literally tears up the soil, causing billions of dollars in damage to valuable farmland. A large group of pigs can turn a crop field into a muddy, tilled mess overnight. This can also lead to a shortage of available feed for deer and turkeys in certain areas, which are simply out-competed by the adaptable and hardy hogs. It is estimated feral pigs do $1.5 billion annually in damages.

3. All This Means Lots of Hunting Opportunities

Feral hogs are considered to be non-native or "invasive," so many areas require no special hunting license, have no closed season on hogs, no bag limits, and hunting at night is also legal in certain jurisdictions. Landowners who are not normally willing to allow hunting on their land are often more than happy to allow you to try to reduce their swine problem. This can then open doors that may have been previously closed to you for hunting other species like deer or turkeys.

Wild hogs are also made of tasty pork! Bacon, sausage, chops and loins are just some of the meaty treats to fill your freezer. Some big boars can weigh up to a few hundred pounds, and that translates into a lot of ham. Just remember feral hogs must be field dressed and cooked properly. Here is a recipe for wild boar on foodnetwork.com

If all that isn't good enough reason already, I've got one more for you...there's some really neat new "stuff" available made especially for hunting wild boar. Manufacturers have developed specialized gear that includes everything from guns to night-vision optics to bullets to hog calls, wild hog attractants and broadheads with the unique needs of the hog hunter in mind. Hogs are tough critters, with wire-like hire and thick hides, heavy bones and muscles, and even a plate or shield of thick tissue covering their vital organs which serves as protection during violent encounters between hogs, so you need to make sure your weapon of choice is up to the task. Hunters don't usually need a lot of excuse to buy new gear, but hog hunting does provide a good reason to pick up some of these new offerings to make sure your gear us "hog" tough.

If you haven't tried hog hunting before, now is the time.