Korey Sprengel is one of the biggest names in professional walleye fishing today. He’s won plenty and is now a veteran of the sport. However, to this date, Sprengel has yet to take on the greatest challenge presented to any angler; Three Questions from Pros4- 1Source.

Read on and see how this Wisconsinite held up to the onslaught.

DL – If you could be an athlete in another professional sport, what sport would that be?

KS – Probably a hockey player. That was my sport as a kid. I was defenseman. I played until the point where it interfered with my time to be outside fishing and hunting on my own. I quit playing just before high school. 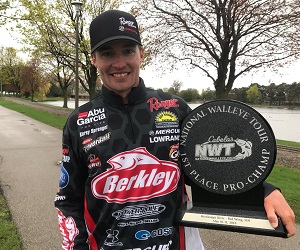 I don’t follow the sport much anymore, I used to like the Detroit Red Wings and the Colorado Avalanche. Now I might go to a couple of the University of Wisconsin Badgers games each year.

DL – Where would you go for your ultimate fantasy fishing trip?

KS – I’d say walleye fishing in the Bay of Quinte in Ontario. I’ve never been there. They have huge walleyes. It has a lot of deeper structure and current, which I like to fish. Those big water fish get huge and strong and bite hard.

I’ve wanted to fish there since I was a kid. I’m surprised I haven’t gone.

DL – Do you prefer drinking beer or soda?

KS – Hmmm, soda more than beer, root beer, but I personally no longer drink either one. I drink AdvoCare Spark now in the mornings. I don’t drink coffee and it has caffeine equivalent to a cup of coffee in it. Plus, it has nutrients as well. I’m not a morning person, so it helps get me going with no crash.

When I’m fishing, I drink water or gatorade.