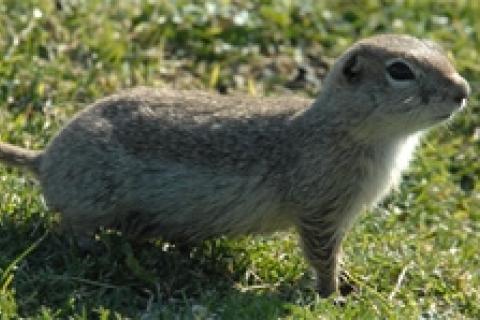 Ahhh!!! Spring is finally here. There's so much to do this time of year in Idaho you can wear yourself out. There's turkey and bear hunting and what about crappie fishing? What's a guy to do? Go shooting whistle pigs, of course, which is one of my favorite outdoor events of the year. It involves a lot of high speed shooting. What's not to like about it?

If you've never been out west in the spring and seen one, a whistle pig  is also known as a Townsend Ground Squirrel — it resembles a miniature prairie dog. Whistle pigs are unique in that they're a lot smaller and more hyper. Due to the terrain that I hunt I don't get a lot of shots over 200 yards, plus they scurry around more and don't give you as many still shots as a prairie dog does.

Whiste pigs only come out in the spring. Even though everyone will tell you that the first warm day in spring they'll come out, I've actually had some of my best hunts on cool, windy days in March, but as a whole, warm sunny days are best.

They come out intermittently in March and are out in full force in April and May, and by the time the temps start rising in June they go back underground for the year. As far as I can tell they come out to breed and eat green grass.

If you're new to whistle pigs and don't know what gun to take, I've seen them shot with bows, pistols, shotguns and .22's on up to 25-06's. No doubt, the most popular gun is a .22 with the ever-popular Ruger 10/22 leading the pack. Butler Creek makes a 25-shot plastic clip that further enhances them as a fun shooting/plinking gun. On a good day you'll want to have two to three clips. It gets that wild. One 25-shot clip just empties too fast and leaves you unarmed.

The .17 HMR (Hornady Magnum Rimfire) reaches out a little further than a .22 and has a little better visual effects but nothing like a .223. In fact, I'm about to switch to my .22 due to the sheer volume that I will be shooting.

I have a 4x12 Leupold on my .17 HMR. On my AR I have a Bushnell Legend Ultra HD Elite 4.5x14. While on the topic of scopes, I know I've said it a million times but always buy the best one you can afford.

You can hunt whistle pigs without a scope, but you won't have as many shots. They're little buggers so you need a scope to pick them out. You also need to pack along binoculars. Glass the area and pretty soon you'll see the little prairie rats running around in the grass. If you don't have your binoculars you're going to miss a bunch.

At times it seems like they come in waves. You'll shoot a while and then they'll lay low for a minute. Then after a few minutes it's like they can't handle it and swarm out again. It's fast shooting and a blast.

It's a super good way to get kids into hunting. It's not intense like a lot of hunting is. You have to admit, elk hunting can be tough. The terrain is a killer and many times it's cold as heck. Then on top of that you're lucky if you get one shot in a week of tough hunting. That makes for a tough hunt for a kid that's excited and wants to kill something.

Also whistle pig hunting is a good way to sharpen up your shooting skills. You get a lot of fast shooting and it gives you a chance to get a lot of practice. On good days I'll go through 450-500 rounds. I get to practice fast shots and long shots, allowing for windage, judging yardage and all the things that make you a good hunter. I've practiced on long shots and hit them at 197 and 207 yards with a .22.

For whistle pigs, you won't need a shooting bench, as most of the shots are semi close. On prairie dogs you may be taking 200-500 yard shots whereas most of your whistle pig shots will be somewhat within a 150-yard range and more than likely 75 yards or less.

When taking people prairie dog hunting in Colorado I've had 10 to 12 hawks and eagles setting out in our shooting path picking up prairie dogs as we shot them. On whistle pigs, I'll usually just have one or two hawks hanging around. One year a buddy shot one and while it was bouncing around a hawk swopped down and stole it. One year I had a badger run by and grab one.

A couple of years ago my nephew got home from Afghanistan and he stopped by for a few days. We had a tough decision: bear, turkey, whistle pig hunting or crappie fishing. We finally decided to hit the whistle pigs. Boy, were we happy with our decision.

We hit some of my spots and barely got in the pasture at the first spot and got swarmed. I then took him to a spot that I haven't hit the last couple of years. We barely got in the gate and we were scrambling for our lives. They were attacking from everywhere. We shot somewhere around 900 rounds that day. It was unbelievable. We had the time of our lives. It was the best ever.

Varmint Hunting: Are You Ready for Summer Shooting?