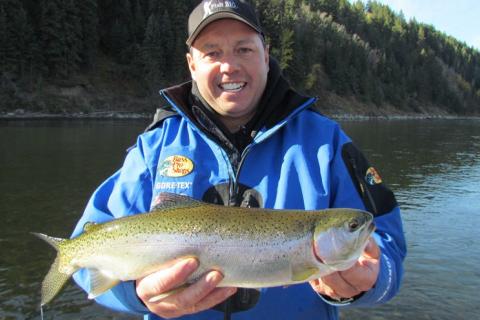 Rainbow trout are one of the most sought-after trout species throughout North America by avid fly fisherman. There is nothing like the anticipation of a rainbow trout taking your well-placed imitation fly on the surface of the water. Especially, if you’ve hand tied that well-placed fly yourself. Yes, rainbow trout love to feed on creepy-crawlies that float on the surface, however, rainbow trout can be very aggressive and consume much more substantial meals and when the bug eater turns bad, my go-to lures are Rapala Shadow-Rap jerkbaits. 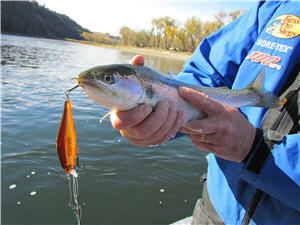 North America has hundreds of thousands of miles of amazing river systems and tributaries that rainbow trout and other trout species call home. Depending on the river system they can either be fished from a float tube such as the Fish Cat 4, or the Outcast Fish Cat Panther Pontoon boat, a riverboat or if the river conditions allow your Tracker boat. Many river systems are also ideal for shoreline anglers. However, a few years ago I truly learned the fine art of crankbait fishing rainbow trout on a guided fishing trip with Bow River Blog on the Bow River in Alberta, Canada. 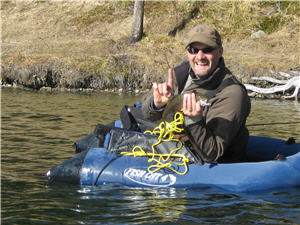 Position in the River Makes a Difference 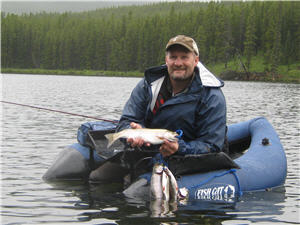 If a resting rainbow missed the lure or was hesitant on the first pass you have just provided the trout with a second opportunity to feed. This presentation has served me well as I believe the Shadow-Rap Shad being retrieved against the current now looks like a tired and stressed minnow fighting the current which makes an easy target for resting rainbows.Taking a page from the fly fishermen's handbook, anglers must be aware of their shadow. Whenever possible when fishing current breaks, be mindful of you or your boat’s shadow that it’s not casted overtop of your targets. Over the years my hookups have greatly depleted when my shadow was protruding overtop of my targets.

Preferences to Rod and Reel Combos

When fishing from my float tube or pontoon boat I prefer the 5’6” Bass Pro Shops XPS Bionic Spinning Rod and Spinning Reel combo in a medium-action. The shorter rod allows easier casting and positioning when working my float tube or pontoon boat in the current. When fishing from a boat I prefer the same rod reel combo but in a 6’ or 6’5” length which allows me to keep my boat further away from my targets and make accurate casts to my targets. And regardless of the brand, I highly recommend a no-stretch fishing line. Anglers are not only fighting the fish, they are also fighting the current and line-stretch in the current can cause an angler a great deal of grief.

Watch Video: How to Use a Crankbait to Catch Trout

Jigging For Rockfish on the Pacific Ocean (video)

Use 3-Way Rigs on One of the Strangest Fighting Freshwater Fish, Lake Trout (video)

Salmon Troll the Rocks and So Should You (video)

Catching Speckled Trout the Gators of the Gulf

David A. Brown for Trout