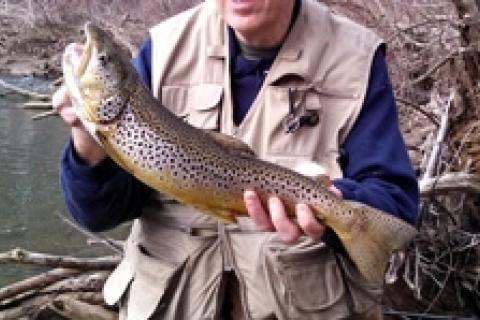 Downsized bass lures — often thought of as finesse bass lures for moody fish — are many times ideal for catching stream-dwelling trout, performing as well or even better than more traditional offerings.

Few savvy anglers overlook the effectiveness of hard jerkbaits on bass. Yet the use of this style of lure is largely ignored for trout, a bit surprising since trout, like bass, eat plenty of minnows.

Consider fishing a hard jerkbait in situations where you might typically use an inline spinner like a Mepps Aglia, Blue Fox Vibrax or Panther Martin. Fly fishermen will fire a quartering upstream cast to bring the jerkbait through the head of a pool. A quartering downstream cast is appropriate for working a pool's tailout section where the combination of angler-provided action and the flow of the current sweeps the lure through the money zone. Pocket water within riffle areas is yet another key target of a hard jerkbait. By holding the rod tip high, strike-provoking twitches tend to pull the bait upward, minimizing hang-ups in such spots, which typically are quite shallow.

So what advantage does a jerkbait have over a spinner fishing lure? A primary one is depth control. Since a jerkbait either floats or suspends, depending on its design, it's not apt to snag bottom when you pause it, an attribute not enjoyed by a spinner. This gives the angler plenty of latitude in the way he or she manipulates the lure, allowing for intermittent pauses that accurately mimics a stunned/injured minnow. Often it's this stop-and-go action that provokes a strike.

Hard jerkbaits are also excellent hooking lures, benefitting from a pair of small, but razor sharp trebles. If fact, if you plan on releasing your fish, or are fishing in a special regulations area that demands such, it's wise to pinch down barbs to facilitate unhooking trout. Also, hooked trout often become entangled in both hooks during their struggle. Replacing trebles with double (or even single) hooks will minimize damage to the fish from this.

One would be hard-pressed to find a serious bass angler that doesn't carry a bag or two of sinking stickbaits of the Senko genre in the tackle box. Can the same be said of the trout anglers fly vest? Not so much, which is a mistake, as small stickbaits can be equally effective on stream trout.

Many of the current soft stickbaits are offered in the 5- to 6-inch size. For the typical trout fishing situation, seek smaller versions, like the 4-inch Gary Yamamoto Senko, or Bass Pro Shops' 3-inch Stick-O Worm. One of my favorites has been the 3-inch Yum Dinger Worm, which currently isn't offered in that size, though you still might find some on the tackle store shelf.

A red worm or 'crawler (or tail half of a crawler) drifted through likely lairs has been the undoing of many a creek trout. Soft stickbait tactics can be as simple as just replacing the real thing with the duplicate. Since sinking stickbaits are loaded with salt, they sink naturally, often needing no additional weight. A split shot or two can be pinched a foot or so above the hook if needed to get the bait close to the bottom. During early spring, when the water is cold and trout won't move far to intercept food, being within inches of the bottom is often key.

The classic wacky rigging is usually fine for trout stream rigging. A size 6 or 8 octopus style live bait fishing hook pierced through the stickbait's midpoint permits a natural drift, and places the hook in a location where it's likely to result in a hookup.  Another option of to nose-hook the bait.

A sinking stickbait can be used in any situation where you'd fish the real thing. Areas that are particularly suited for the application include undercut banks, as well as gnarly logjams. Big browns in particular are known for hanging out in such nasty places.

Advantages of soft stickbaits over real worms? Durability is one. A soft stickbait isn't going to be picked clean by a school of hungry creek chubs. And you're not likely to tear it up (or cast it off) skipping it back under overhanging branches. Trout have excellent senses of smell and taste, and there's no arguing that the real thing provides plenty of each, particularly when it's fresh. But sinking stickbaits are also loaded with flavor and scent enhancers.

Stickbaits are available in attention-getting "loud" colors, which can be a benefit when fishing for freshly stocked trout which haven't yet developed the ability to identify natural foods. Lastly, if you inadvertently leave a bag of stickbaits in your vest for a few months, no big deal; not a pleasant experience when you do the same with natural baits.

The twister tail grub and jig combo is what many bass anglers reach for when times are tough and they need to catch a fish. It's kind of like what the Wooly Bugger is to fly fisherman seeking trout, a confidence offering that can be fished in a variety of ways. Taking this analogy a step further, smallish twister tail grubs in many ways are the spin fisherman's version of the utilitarian Woolly Bugger.

Two-inch grubs like Bass Pro Shops Squirmin' Grub, when mated with a lightweight jighead, can be used as a swimbait. Like a spinner or spoon, it can be cast across the current, its thin tail quivering in a strike-inciting motion. In slower pools it can be hopped along (or close to) the bottom, suggesting a crawfish or other bottom-oriented food like a hellgrammite. At times, a simple dead drift, with the grub flowing with the current, can be effective, particularly during the end of the drift, when the line tightens up and the jig lifts upward. Depending on the situation a combination of these presentations can be employed from the same casting location, sometimes even within the same cast.

Bass Pro Shops Painted Jighead Kit, which are offered in light weights, are excellent roundhead jigs for coupling with small twisters. Typically, lure weights in the 1/16 to 1/8 ounce range are most useful for this type of fishing. Carry grub bodies in colors such as white, black and watermelon seed.

Use Jigging Spoons to Catch More Fish in Cold Water

Catching Speckled Trout the Gators of the Gulf

David A. Brown for Trout

Jeff Knapp, of Kittanning, Pa., has been covering the outdoors for over 20 years. He's been published in a wide variety of national, regional, state and local publications. He also operates the Keystone Connection Guide Service, which focuses on fishing for smallmouth bass on the Allegheny River, as well as other species in select western Pennsylvania waters.Â
END_OF_DOCUMENT_TOKEN_TO_BE_REPLACED