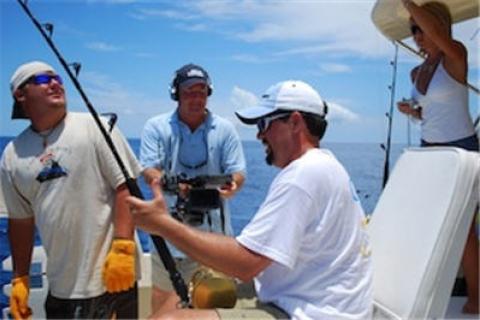 When we last saw the fisherman, he had just started his fight with the tarpon ...

Meanwhile, the fisherman hangs on -- literally -- trying to gain some line back. He hears applause from the heavens above, thinking for sure God and the angels are applauding his efforts to tame this prehistoric fish, when he realizes he is sitting alongside a docked cruise ship and the passengers are leaning over the rail watching the embattlement of man versus fish. 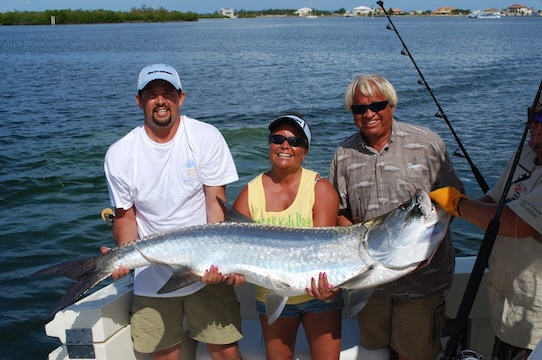 One has to think at this time in the struggle exactly what it was that drew Ernest Hemingway back to Key West over and over. We know the women was one factor, and the rum, another. But the other was the tarpon fishing -- so addictive!

The fishing is set up there at the beach by the docking of the cruise ships, whose prop wash stirs up the bottom sand. The larger tarpon will hide in that sandy wash to feed on whatever forage is produced by the prop wash. Small sharks, usually flatheads, thrive in these conditions and are a target of fly fishermen while the tarpon anglers do battle.

Usually, the tarpon will wear down in less than an hour -- not much less, though -- and will come up and belly over next to the boat. Kodak moment! This is the time that the length and weight of the fish can be captured. The captain will ask the angler if he wishes to finish fighting the tarpon down so the fish can be hoisted up for a photograph or two, and a few tarpon scales can be had as souvenirs.

Most of the guys ask, “How long will that take?” The captain will reply with a certain degree of coyness, “At least an hour.” The most frequent response is, “Cut her loose! I can buy a tarpon scale in the souvenir shop.”

Then the captain estimates the weight for the angler, takes out a pocket knife and cuts the line. The hook will rust out in less than a day or so, and the tarpon is perfectly unharmed, with no gashing marks from having to gaff the fish to lift the fish up for the photo.

It’s wonderful experience, one that will not soon be forgotten but will endear itself in the fisherman’s mind for years to come. When asked to go bill fishing, most tarpon sportsmen will decline. (200-pound tarpon vs 1,500-pound bill fish), but that angler will respect the strength of saltwater fish forever, never forgetting the first 10 minutes of feeling the pull of the tarpon struggling to get away.

And they usually do, one way or the other. Always practice catch and release.

Here's a link in case you missed Tarpon Fishing Part 1

Food for thought: There are a huge number of tarpon fishermen who fish with fly rods. Think on that note: To do so, they normally fish out of small flat-bottom boats or skiffs. Tarpon are famous for their breathtaking leaps when hooked, or sometimes, feeding. It is not uncommon for a tarpon to jump, rattle its scales and land in a boat that is maybe 50 yards from the angler who has him hooked. This happened to several outdoor writers a few years ago. There were injuries. So be careful.