These Tips Could Save Your Life: Lightning Safety in the Outdoors 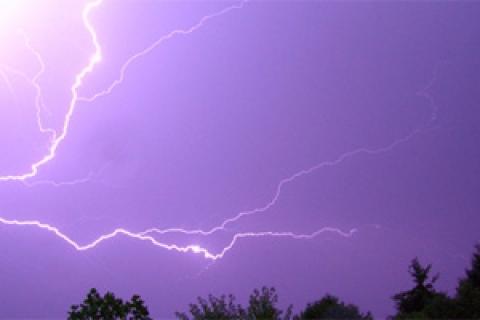 When temperatures rise outside, so do the number of people enjoying the outdoors. But the beauty of nature can also bring harm.

And while spring may produce storms and rain, the summer is actually peak season for lightning deaths in the United States. According to statistics from the National Oceanic and Atmospheric Administration, 70 percent of lightning strikes occur in June, July and August.

Those months are also peak times for outdoor activities, which can create a dangerous situation for anglers, campers, boaters and hikers. According to NOAA, of the 238 lightning strike deaths that occurred in the U.S. between 2006-2012, fishermen accounted for 11 percent of the casualties, followed by campers with 6 percent — leading all other outdoor activity. And hundreds more are injured each year, suffering from lasting symptoms such as memory loss, dizziness, weakness and numbness.

Each year, thousands of people die from lightning strikes worldwide and thousands more are injured. If you're enjoying the outdoors, pay attention to the weather by using portable weather radios like the La Crosse Technology Handheld NOAA Weather Radio. And if you find yourself in the middle of a storm, you'll need to know how to stay safe.

Reduce the Chances of a Strike: Lightning Position

The first important thing you should know about being outside in an electrical storm is the "lightning position." According to the National Outdoor Leadership School (NOLS), this position "will reduce the chances of getting a direct strike and it may reduce the other effects of lightning, but it offers no guarantees."

A good time to get into this position is if lightning is striking near you and you cannot get to shelter safely.

To get into "lightning position," stop, squat (or sit) and ball yourself up so you are as low as possible. Wrap your arms around your legs or put your hand over your ears to protect your ears from thunder. Close your eyes and keep your feet together at the heels. To minimize contact to the ground, try to stay on the balls of your feet as long as possible if crouching. If you have a foam pad or a soft pack of clothes, sit on them. Avoid packs with frames and get rid of any metallic objects.

Below are 8 outdoor situations and what you should do if you find yourself caught in a lightning or thunderstorm, according to NOLS and NOAA.

What to do in Elevated Areas, Hills, Mountain Ridges & Peaks When Lightning Strikes

Get off of elevated areas, such as hills, mountain ridges and peaks and move to low terrain. If possible, descend to the ground on the side that has no clouds over it.

What to do in Campsites When its Lightning Outside

Tents increase the likelihood of lightning hitting that spot if the tent is higher than nearby objects. Metal poles in tents can conduct ground current. Move to a safer terrain, such as a vehicle or indoors. Do not take shelter under a tree. Being underneath a tree is the second leading cause of lightning casualties, according to NOAA.

What to do Around Water for Lightning Safety

Boaters should start to get off the water as soon as they hear thunder. If you have to move across sand to get to shelter, GrindTV suggests you crawl across the sand until you reach shelter or your vehicle. Stay away from trees along the shoreline, as they're likely the tallest objects around you. If you cannot get back to land safely, drop anchor and get as low as possible in the boat. If you have a cabin on the boat, go inside and stay away from metal and off of the radio.

What to do Around Gently Rolling Hills

Lower flat areas are not necessarily safer than higher flat areas. Look for a dry ravine or a significant depression in the land to reduce risk.

Exposure is high during an electrical storm. Avoid trees and bushes that rise above others. If you are in a group in an open area, spread out 50 feet apart to reduce multiple injuries and assume the lightning position. Never lie flat on the ground. Lying flat increases your chance of being affected by potentially deadly ground current. Keep moving toward a safe shelter.

How Snow is Affected by Lightning

Dry snow is an insulator, but wet snow is a conductor, which makes traveling in dry snow during a lightning event safer than on bare ground.

Avoid Cave Entrances When its Lightning Outside

Avoid cave entrances, as small overhangs can allow arcs to cross the gap. Natural caves that go far back into the ground can be struck. Do not stand in water, avoid metal conductors and avoid bridging the gap between ceiling and floor.

If you have to move through the forest or woods during a lightning or thunderstorm, stay away from tree trunks and avoid large, open areas. Lone trees are especially dangerous, as you are 100 times safer in a forest with hundreds of trees than if you are near a lone tree in an open space.

Other Facts to Consider When its Lightning Outside

How To Survive The Woods