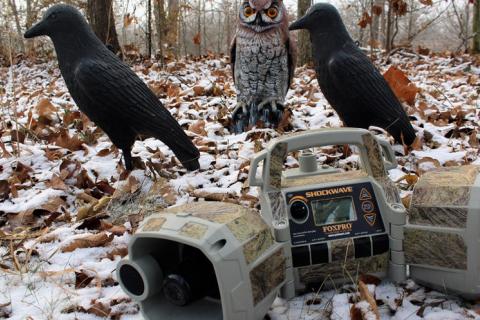 During cold winter months it is easy for hunters to get cabin fever and to develop a high anticipation for the upcoming spring turkey season. Other than predator hunting, there really isn’t much to hunt during the months of January, February, and March, unless one was to take up the sport of hunting crows. Yes, some people eat crow however it is not really an item that is popular on the menu. 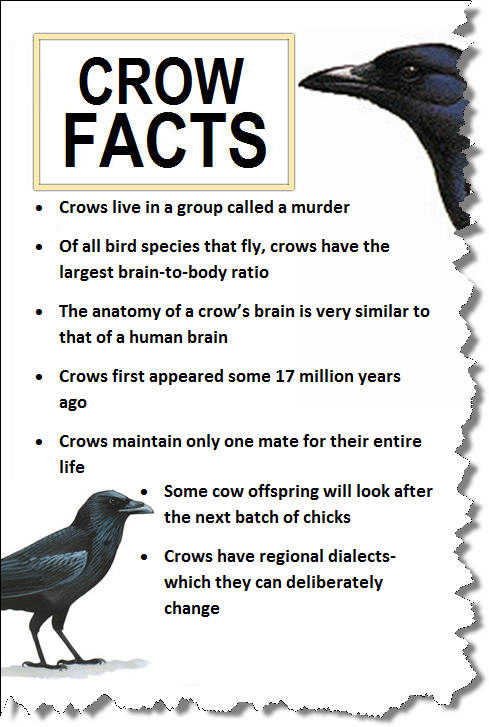 Crow hunting is one of those sports that is fun to do with friends. On the majority of crow hunts that I have been on, I’m reminded of the similarity to hunting ducks out of a blind. Stories are told of past hunts as are jokes and a lot of shells are shot in one day. Other than being a fun time, there is a reason for hunting crows. Several farmers will say that they are a destructive animal, crows will dig seed out of the ground, will eat in farmers cornfields and the pecan trees in the southern states tend to be one of a crows favorite meals. If that is not enough of a reason to manage this bird, I found an interesting fact on crowbusters.com which is a information site for crow hunters. It states that crows are known to affect the duck population, taking an average of 110 to 120 eggs off of the nest in one year. They will also attack baby ducks, bunnies, and squirrels. With all of these facts, it is easy to see why the crow population needs to be managed by hunters.

If you're new to hunting crows, here are a few basic tips to get started.

Calling crows can be fairly easy if done right. There are two main sounds that will bring crows into shooting range. The first sound being that of several crows gathering together. This sound will be an exciting sequence of crows gathering over food, other crows, or something that causes a lot of attention. All of this noise creates curiosity which makes more crows come to investigate.  The second sound is of a fight. Like with any other living creature, a good fight always brings in a crowd. The sound of a crow/hawk fight, crow/owl fight, or the sound of crows fighting amongst themselves are all great sounds that cause attention, as well as curiosity.

As for how to make these sounds, there is hand calls such as the RedHead Crow Locator Mouth Call, this type of call is made by blowing air into a plastic reed which makes multiple sounds of a crow. There are also other hand calls such as an owl hooter or hawk call that can be used along with a crow call to make a wide variety of sounds. The easiest way to call crows is by using an electronic call such as the FoxPro Patriot Electronic Game Call, which has the ability to play several different sequences of calls such as Crow Gathering or Crow Hawk Fight. For the more serious hunters there are electronic calls designed specifically for crow hunting that have two large speakers that allow the sounds to reach out farther. One of those calls is the FoxPro Super Snow Crow Pro Electronic Call.

No matter which type of call is being used, the result is most likely to be the same. Once a calling sequence begins, a response will happen quickly. On most of my hunts, I tend to have crows around me within the first minute. Keep calling until crows stop responding, then move to a different area, which may only be a hundred yards away and continue by doing a different sequence of calling.

Tip: Although it is possible to call crows anytime of the day, the best time is early mornings, and late evenings. Check local game laws for seasons, as well as shooting hours.

2. What Are Crow Decoys Used For?

Answer: If someone were to ask me to give one tip that would make them a more successful crow hunter, my advice would be to use decoys. On the majority of set ups, if decoys are not in place crows will respond to the sounds, yet they will not come into gun range. Crows are a visual animal, if they do not see what they are hearing, they become skittish and will not commit to the sounds. The ideal decoy set up is to place 3 to 4 stationary decoys such as the popular Flambeau Foam Crow Decoys, along with 1 to 2 decoys that have some type of motion, for example the Mojo Outdoors Motion Crow Decoy. It is very important to have some type of movement in the decoy set up. In my personal experience, my success rate tripled when I began using motion decoys. On several occasions when I didn’t have them, crows would respond but they would land in nearby trees, only to watch for a minute then lose interest and leave. Movement is the key to convincing them that the situation is real.

Another decoy set up is to use 3 to 4 crows along with an owl decoy such as RedHead Owl Decoy. When adding an owl and using the fighting sounds it becomes a more realistic environment, thus making crows fly into shooting range to join the comotion. 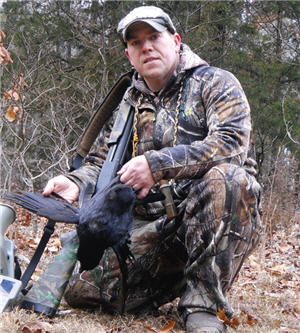 Answer: When crows come into a calling sequence they will most likely come flying in at a fast speed, and circle the decoys many times. Very rarely will they ever land unless it is in a tree several yards away to observe from a distance. This fast action is why a shotgun is the most commonly used weapon of choice. Usually hunters will use a 12 gauge, 20 gauge or a .410. These types of firearms combined with a lighter shotgun shell load creates a wide group of pellets that make for easier knockdown power. Hunters can use lighter loads such as Winchester Texas Heavy Dove and Quail load shotshells, or some like a heavier knockdown power such as Winchester Super-X Hi Velocity Waterfowl steel shotshells.

Tip: Just like waterfowl, doves and upland birds, a crow is a fast moving target. Practice by shooting clay targets before hunting to make for a more accurate shot.

Even though calling crows can be fairly easy, there a few things that will make a hunter more successful. Crows have incredible eyesight so good camouflage is a must, especially when it comes to gloves as well as a face mask. The hands and face, if not covered can both be easily visible to an approaching crow. Using an eye catching decoy set up prevents crows from spotting hunters as well as triggers their curiosity. The last tip I have is to be a good shot, even though the main purpose of hunting is to have fun, we all know that it is not much fun to be known as the hunter who shot a case of shells but didn’t carry anything home with them. All in all crow hunting is a great way to spend time with friends and family in the outdoors while doing our part as conservationist.