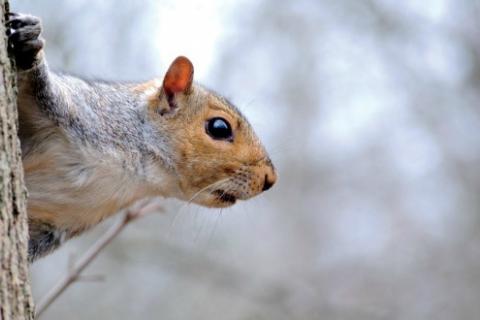 Easing slowly through the hardwood river bottom, I froze mid-step. The bark of a scolding squirrel rang out from the treetops.  Scanning the woods around me, I finally spotted him—halfway up a nearby white oak. Slowly raising my shotgun, I aimed and fired. The scolding ceased, and I was one squirrel closer to a hearty stew.

January is one of the cruelest months for hunters. Deer season is winding down or has already finished. Turkey hunting is still months away. Bears have hibernated, and sometimes a hunter may feel like joining them and sleeping until spring.

Break Out of the Rut

Squirrel hunting, however, can be at its best this time of year.  The lack of foliage on the trees allows for better visibility and cold temps don’t stop bushytails from venturing out for a winter snack. The thought of squirrel stew is enough motivation to get me out of the house, while fast shooting and steady action subdues the onset of frostbite.

If I’ve seen good activity in a particular area I may take a stand there and wait for the game to come to me, like a classic deer hunt. After the long days on stand waiting for whitetails, however, I’m usually interested in pursuing a more active approach. This means still-hunting.

It’s invigorating to move quietly along a hardwood ridge—searching for the twitch of a tail, the odd oval form on a branch, or the sight of these acrobats jumping from one tree to another.  I’ll often hear them before I see them—scurrying through fallen leaves, chewing on a nut shell, or chattering to their companions.

Shotguns or .22 rifles are both suitable for still-hunting. I let the habitat, game regulations, and proximity of nearby homes and highways make the decision for me.

I use shotguns with an improved cylinder or modified choke, depending on how far my typical shots will be. I typically opt for size 4, 5, or 6 pellets in high brass loads.

For rifle hunts, I prefer a .22 LR.  I’ve found that hollow point rounds are the most effective and a variable scope in the 3-9X or 2.5-10X range usually does the trick.

Oak and hickory forests are naturally great choices, but stalking near the edge of cornfields can be another good option.  Squirrels venture into the harvested crop field for leftover grain and they’ll use the cover of adjoining woods to find food and shelter.

I work slowly, pausing often to scan the ground, tree trunks and over-hanging branches. I listen carefully for the tell-tale rustle or chatter of a nearby squirrel. If nothing shows after a few minutes, I’ll move ahead 20-50 yards—quietly— and scan again.

If an area looks particularly good I may even sit down for a ten- or 20-minute stretch in case a bushytail is present, but simply hunkered down or on the opposite side of the tree.  This doesn’t always pay off, but it works often enough to be worth trying.

Be a Fair-Weather Hunter

I try to time my hunts for days with low wind and some sunshine. I avoid the coldest, bitter days. If I do hunt these, I’ll get out during the midday hours when the temperatures are at their warmest. Squirrels will be most active during these times.

That suits me just fine. January mornings with sub-freezing temperatures can be a bit rough to take, especially after weeks of long days on deer stands. But by 8 or 9 a.m., the thought of stalking a squirrel sounds like just the ticket to help fill out the remainder of a long winter’s day.

Tagged under
Squirrels
Hunting Tip
How To Guide
Read 5,216 times

Gerald Almy has been a full-time outdoor writer for over 35 years, with articles published in over 200 publications. He has written hunting and fishing columns for many newspapers both in Virginia and Texas, as well as the Washington Post. He has written two books on fishing and contributed chapters to a number of hunting books. He has won many awards for his writing. In 2008, a feature he developed for Field & Stream and wrote for five years called “Best Days of the Rut,” was nominated for…
END_OF_DOCUMENT_TOKEN_TO_BE_REPLACED