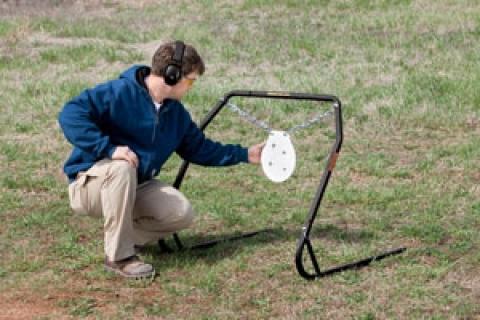 According to a report from the National Shooting Sports Foundations, there are more target shooters in America than there are people in New York state. I'm not surprised. Target shooting, or informal "plinking", not only helps develop the essential skills used in hunting and more serious target shooting, but it's good practice and just plain fun. Whether using rifles or handguns, here's what you need to enjoy a day of plinking.

Shooting Starts With the Right Gun

Depending upon what kind of shooting you want to do, a .22 rimfire rifle like th Henry 22 Magnum Lever-Action Rimfire or an air rifle (make no mistake, air rifles are not just for kids anymore) are going to be your best bets, especially if youngsters are going to be involved. Such guns tend to be inexpensive, have little or no recoil, and are quiet to shoot, not to mention that ammo is relatively cheap.

All of this helps you enjoy lots of shooting. They are also great for learning or honing the fundamental skills of shooting, which will carry over to shooting larger calibers.

Ammunition Can be Affordable

As mentioned above, ammo for .22 and air rifles tends to be quite inexpensive, so your pocketbook doesn't have to take a big hit after a long day of shooting. Since you aren't hunting, you can opt for low-cost cartridges or pellets that are designed for target shooting, and may even be available in bulk.

Picking something to shoot at can be half the fun. Of course, standard paper targets like Cabela's Clear Shot  are fine, but there are certainly more fun 3D targets like the Daisy Oozing 3-D Watermelon choices out there. Tin cans are an old reliable standby, but so are jugs filled with water that explode on impact. However, spinning targets and the new breed of interactive "self-healing" rubber targets that dart, jump, fly, wobble, bounce or roll are an absolute blast (pardon the pun). No matter what kind of target you use, please pick up after yourself and don't leave any bullet-riddled targets lying around.

Finding a Place to Target Shoot

This can be as simple as going out behind a barn or as formal as an organized shooting range, but safety should always be most important. Make sure that you have a safe backstop for all of your shots, such as a gravel pit, a hill side or thick woods.

One of the most challenging things you can do, and thus the most valuable practice you can get for hunting situations, is to have a friend set up a shooting course with a number of hidden targets along a trail through a wooded area, without you seeing the location of the targets. You then walk the course and encounter each hidden target at different ranges and shooting angles.

Shooting at the same static targets at the same distance all day is fine, but the more random and variable you can make the shots, the better prepared you will be for hunting season, especially if you are forced to utilize different shooting positions.

Again, safety is always the top priority, so all participants need to wear both eye protection such as specialized shooting glasses and hearing protection like shooting ear muffs or ear plugs even when shooting air rifles.

Excellent paper! Some of us, however, have done so much plinking that one would think we're addicted! The biggest value comes from the air rifle. There's a ton more places where it is legal, safe, and does not bother neighbors. Yes, these tend to be single-shot, but folks rarely need quick follow-up shots when hunting.