5 Tips on Coyote Vocals & Hunting in the Early Season 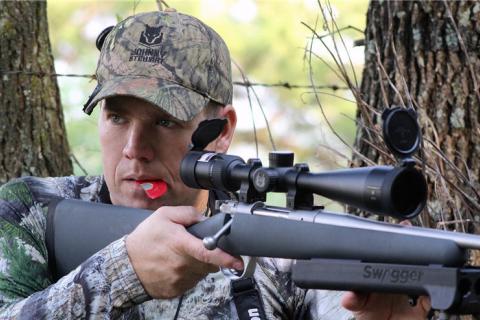 Last October a good friend of mine invited me to hunt with him on his family farm in southern Missouri. They had witnessed several coyotes in their hayfield and were concerned for their livestock. My hunting buddy knew my passion for hunting and my experience using different coyote vocals to lure them in. I've listed a few tips in this article that have helped me be more successful in harvesting coyotes and will perhaps help you increase your success at hunting coyotes too.

Hunting for coyotes from a box blind that is normally used for deer hunting works great and will give you a better view over the tall grasses growing during summer. Our hunting blind bordered the edge of a large hayfield. This gave us a vantage point where we could see several hundred yards to the left, as well as in front of us.

TIP: Get to your hunting spot early in the morning before sunrise to keep from spooking any coyotes that might be in the area. Make your set up with the wind direction in your face or a cross wind. Remember always sit where you can see down wind. The majority of coyote's will try to come in on the downwind side. A coyotes biggest defense is their sense of smell. A good scent elimination regime is a must along with paying attention to wind direction.

2. Choosing the Right Coyote Calls in the Early Season

During a hunt in late July, my hunting partner and I set up on the edge of a cow pasture. We set up the electronic caller and positioned it about 20 yards directly in front of the blind. I started with 2 or 3 howls on an electronic call, and answered back with some high-pitched howls on a diaphragm style call. This calling sequence is meant to simulate a younger coyote answering an adult howl. The howling done in this sequence should stir up the curiosity of an adult coyote bringing him in close enough for you to make a successful shot.

TIP: Try the  Johnny Stewart Calls Grim Speaker 2 electronic call combined with a double reed diaphragm call. I like the Grim Speaker 2 call because of its 110 decibel speaker that reaches out in open areas, plus it has 256 megabyte of storage which allows me to have a sound library of authentic sounds covering every situation of calling sequence that I may need while hunting summer, early fall, Including distress sounds, as well as a wide variety of coyote vocals.

3. Top Sounds to Attract Coyotes in the Early Season

2. Coyote pup in distress sounds during late spring, early summer when coyotes normally have their pups. The pups will be with adult coyotes all summer into fall. Adult coyotes will respond to this sound to see if pups are in danger.

3. A Lone Howl Locator on the electronic call along with answering back with high pitched howls on your diaphragm call. This will simulate a younger coyote answering an adult howl. Coyotes are curious and they will respond to howls to see who is making the sounds, or to see what other coyotes are up too.

4. Make three to four subtle howls before you begin your regular calling sequence. This introduces a coyote into the area. Coyotes may not respond to just the howl, but if they hear your howls, then a minute or so later they hear a rabbit in distress, they think a coyote is already close to the distressed rabbit which makes them want to respond quicker because of coyotes being so territorial.

4. The When and Why of Hunting Coyotes

1. Spring - Coyotes are beginning to have their pups, which in turn will make them consume more food to raise their young. An easy meal is something that male and female coyotes will be looking for. This makes a lot of your food source calls work effectively this time of year.

2. Summer - Coyotes pups are becoming old enough to be out on their own, which makes for some exciting calling because the younger coyotes are more likely to respond to coyote vocals then a mature adult coyote would. Summer is also a good time to help your local farmers by managing their coyote population.

3. Fall - With the temperatures starting to lower this time of year coyotes will be more active during daylight hours giving hunters more opportunities to hunt. Cooler temperatures also make coyotes need more food to stay warm. This is also when coyote pelts are thicker so that hunters can harvest the fur to sell.

TIP: Adjust the sound library of your call to the time of year you are hunting. For example, do not use an estrus whimper sound during the summer months. Female coyotes go into estrus during late January so the sound is irrelevant for that time of year. Spring and summer is when animals are having their young, use pup howls or puppy whines to better your chances during summer and early fall.

The question really comes down to "why do vocals work during the early part of the season"? A few years back I thought howling, and using coyote vocals only worked during the breeding season (late January and February). After the last two years I have educated myself on being successful in the early season with vocals.

There are multiple reasons why this technique is successful. First, in early summer male and female coyotes will respond to howls because they think another coyote has come close to their den where their young pups are being raised. Coyotes, being the territorial animals that they are, respond seeing who has invaded their territory. Also, using vocals such as a coyote pup in distress will work late summer as well. This is due to the fact that they think one of their pups or a nearby coyotes pup is in trouble. Coyotes are curious and will check out what the situation is. Another reason as to why vocals work during the early part of the season is because coyote pups are old enough to start getting out and exploring on their own. Being a younger coyote, they are little more curious than an older educated adult coyote. Using howls can bring the young curious coyote out looking to see who's making the racket, or maybe even to join in on a hunt for food.

Targeting in on a coyotes hunger instinct usually works well. However, if you find yourself needing to add an extra little something to your calling sequence, try adding in more coyote vocals.

Hunters! Are Coyotes Not Responding? Maybe it's Your Set Up