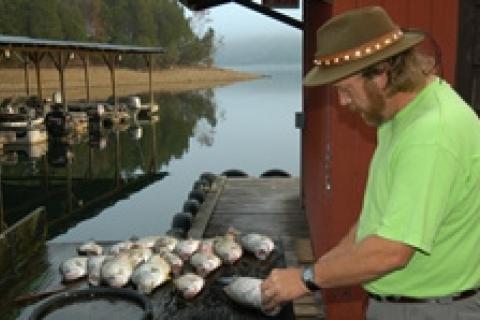 Panfish are exactly what their name implies — fish small enough to fit in a pan — a frying pan, that is. Among these are such beloved species as bluegills, crappie, redear sunfish, redbreast sunfish and white bass, and lesser-known yet locally popular fish like yellow bass, rock bass, warmouths, longears, spotted sunfish and green sunfish. None of these fish gets very big — a few pounds tops, usually only a few ounces. But as a group, they're among the most popular, most commonly caught fish in the U.S.

Panfish are great fun to catch and delicious to eat. Before the eating begins, however, anglers must know how to properly prepare their catch for the table. Two basic ways — filleting and pan-dressing — are commonly used, both of which are illustrated in this article.

Tools you need include a sharp knife (fillet knife, electric fillet knife and/or plain blade); a cutting board, fillet board like the Bass Pro Shops hardwood fillet board or other hard, flat surface (use plastic or glass to reduce bacteria); a spoon or fish scaler, if you're pan-dressing the fish; a container in which to place the prepared fish; and some newspaper, a trash bag or a bucket for disposal of waste parts. Also recommended is household bleach for clean-up.

After the fish are cleaned, they can be cooked and eaten, or you can store the fillets or pan-dressed fish in the freezer until you're ready to prepare them. To avoid freezer burn and preserve freshness, it's best to immerse the prepared fish in water when you freeze them (either in zip-seal plastic freezer bags or plastic containers) or better yet, to vacuum-seal them. Be careful that the sharp fins on pan-dressed fish aren't positioned in such a way that they could puncture the wrapping or container.

Tip: Watch video: How to Fillet a Panfish by Cabela's Cooking

How to Fillet a Panfish

Nowadays it seems most people prefer to fillet their catch to produce boneless, skinless pieces of meat ready to cook. Here's how to do it, quick as a snap, with an electric or fixed-blade fillet knife.

How to Pan-Dress a Panfish

Some connoisseurs prefer their fish pan-dressed — with skin, tail and bones intact — to facilitate the most thorough enjoyment of these scrumptious wild treats. They don't want to miss a single morsel, and pan-dressing eliminates the loss of the small meat pieces sometimes left behind in the filleting process. You'll have to separate meat and bone as you eat pan-dressed fish, but many panfish gourmets believe this method of preparation produces a more tasty result.

How to Clean and Freeze Panfish Tips

Video: How to Fillet a Panfish by Cabela's Cooking