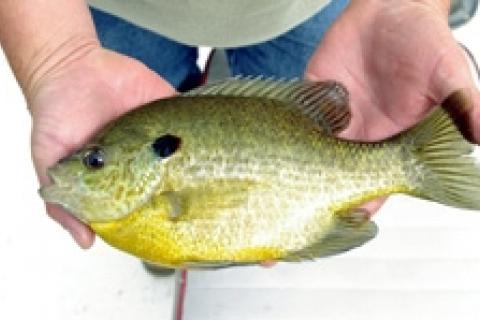 Many remember childhood fishing trips with friends or relatives, dunking worms in a pond or creek, and thrilling to the pulse of scrappy sunfish at the end of the line. Some recollect dogwoods blooming as big redears were pulled one after another from a brushpile hidey-hole. Others think back to frosty winter days ice-fishing for bluegills, or a mid-summer 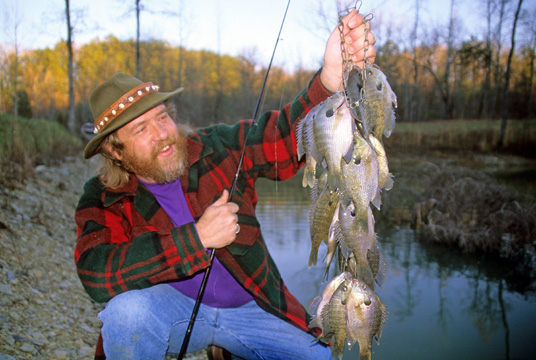 morning spent floating a scenic stream for redbreasts, or that just-right autumn afternoon when the "sunnies" snatched up every fly thrown their way.

We love bream fishing for many reasons. These bantam panfish fight like blue blazes for their size. They're tops on the dinner table. Umpteen-jillion swim in nearly every lake, river, creek and pond in the country. When we want to catch lots of fish, regardless of size, bream answer the call. Nowhere in the continental U.S. are we more than a short drive away from a body of water well populated with one species or another.

Bream fishing is an excellent way to introduce youngsters to fishing, but don't fall for the elitists' inference that bream are just "kids' fish." Catching them is a wonderful pastime everybody can enjoy. No need for fancy boats that could bankrupt a banana republic. No powerbuster rods, jet-dashboard reels and suitcase-sized tackle boxes full of expensive lures. Quite the contrary.

Worms, crickets and tiny fishing lures are the bream's blue-plate special. Cane poles, cut-rate fishing rods and reels and paint-bare johnboats can replace the snazzy gear. Glamorous? Hardly. But bream fishing provides a great alternative to "serious" fishing with its multitudinous gadgets, endless harangues and wearisome technicalities. If you'll let them, bream can lead you back to what fishing is supposed to be — plain, relaxing, out-and-out fun.

Many species of sunfish inhabit U.S. waters, but three are far and away more popular than the others.

The most abundant and widespread of the trio is the prolific, pugnacious bluegill. This panfish originally swam only in eastern U.S. waters, but stocking expanded its range to every state but Alaska. By numbers caught, these sporty customers may rank as our nation's top gamefish. Folks know them by many names — coppernose bream, perch, copperhead, dollardee and blue joe, to mention a few.

Bluegills love company, usually living in loose schools of 20 to 30 individuals. They inhabit everything from ponds, crystal-clear creeks and sluggish bayous to cypress-shrouded oxbows, vast man-made impoundments and broad lowland rivers. A population of adult fish in habitat conducive to good growth usually has many 6- to 8-inch fish weighing 4 to 8 ounces apiece, with a smattering of 10- to 12-inch individuals weighing a pound or more. They grow as much in girth as they do in length. Real heavyweights resemble — in size and shape — the dinner plate they frequently end up on. The world record, caught in 1950 in Alabama's Ketona Lake, weighed 4 pounds, 12 ounces, was 15 inches long and had a girth of 18.25 inches.

If bream fish were placed in divisions like boxers, redears would be heavyweight contenders. These hard-hitting panfish deliver a knockout punch that will put your bobber down for the 10 count.

The "redear" name derives from the crimson-tipped gill flaps. Redears also have grinding teeth in the throat for crunching the shells of tiny mollusks. For this reason, they're often dubbed "shellcrackers." Other monickers include government-improved bream, yellow bream, chinquapin and cherry gill.

Though native to the southeast United States, redears also thrive in many areas where introduced, including most of Pennsylvania, Ohio and Indiana and portions of Virginia, West Virginia, California, Nevada, Arizona, New Mexico and Wyoming. They live and feed mostly on the bottom and prefer deeper water than most other bream. Many are caught around stumps, roots, logs, standing timber and green aquatic vegetation.

Redbreast sunfish haven't gleaned as much press as their larger cousins, but these bream fish fight tenaciously and are held in high esteem in areas where common. In prime waters, they often weigh 1/2 to 3/4 pound. Most large specimens are caught in the Southeast, from the Carolinas down into Florida. The all-tackle world record — a whopper at 2.1 pounds — was taken from Florida's Suwannee River.

A bright splash of color across the breast and belly gives this panfish its name. However, a redbreast's breast isn't always red. It may be vivid yellow or rust-colored. Common regional names include yellowbelly, yellowbreast, robin, red perch, tobacco box and longear.

Redbreasts inhabit diverse waters — everything from cold mountain streams to warm lakes and ponds and brackish coastal marshes — but anglers must be selective about fishing spots. Certain waters have many redbreasts, while similar waters nearby may have none. The best waters tend to be mid-sized streams where redbreasts grub on bottom for snails, crayfish, insects and insect larvae. Redbreasts relish small fish as well, unlike most bluegills and redear sunfish.

Any fishing tackle can be applied for bream catching if the fishing hook isn't too large. But anglers who land the most usually employ the lightest practical tackle. Using fine line, inconspicuous terminal tackle and tiny baits or lures helps overcome the wary nature of large specimens. Light or ultralight rods or poles compound the excitement of playing fish.

Most anglers opt for an ultralight spinning or spincast fishing combo, a cane pole or a long jigging pole rigged with 2- to 8-pound-test line. Some bobbers, small hooks, split shot and a few favored lures round out the selection. Fly-fishing tackle is popular as well. For example you'll have no problem catching a stringer full of bream with Bett's Bream Madness fly or Bett's Bream and Bluegill Popper Assortment.

Even a big bream has a small mouth. Larger adults occasionally eat small fish and crayfish, but bream usually feed on tiny forage animals — insects, insect larvae, snails, worms and other small invertebrates. Anglers should use baits and lures similar in size and appearance to these foods.

How to Catch Bream Fish

Bream fish feed at all levels, grubbing on bottom, picking food from aquatic vegetation at mid-depths and taking insects on the surface. They may be buried in dense cover or in relatively open water. They may bite only around dawn and dusk, or feed heavily at night. Anglers must contend with these and other variables on every fishing trip.

Fortunately, if you do your fish-finding systematically, you shouldn't have trouble determining where or how to fish, even when visiting new waters.

First, remember, bream are cover lovers: They rarely venture far from areas providing protection from predators, a ready food supply and shelter from intense sunlight. Concentrate your fishing in areas supplying these needs.

Also consider other types of habitat preferences. For example, redear sunfish are primarily bottom feeders, usually caught on or near the bottom. Redbreasts occasionally feed on the surface or in midwater, but they, too, are more susceptible to bottomfishing tactics. Adjust your fishing methods to suit the habits of the species you seek.

Be flexible: If one presentation doesn't work, try another. Change the color, size or style of lure you're using; vary the speed of your retrieve; experiment with different live baits; use lighter line or less terminal tackle. Sooner or later, if bream are biting at all, and you've come prepared with an assortment of tackle and baits, you should pinpoint a productive combination. When you do, tuck it away in your memory for future reference. If you visit the same body of water, or one similar to it, during the same time period under similar weather conditions, chances are good the same fishing pattern will bring you luck again.

And if the bream won't bite? Well, kick back, relax, breathe some fresh air and enjoy yourself. They'll start biting sooner or later. They always do. And when they do, you'll have some fresh memories to tuck away for tomorrow.

Tagged under
How To Guide
Fishing Tip
Panfish
Read 134,660 times