Learning to Fish? Bluegill Fishing is Great for a Beginner Angler 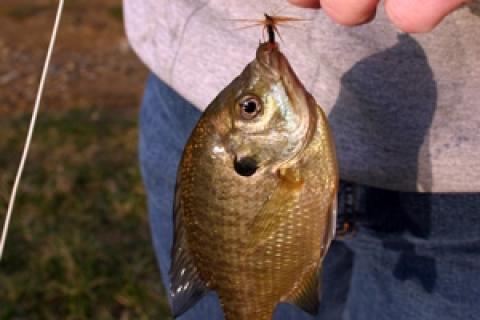 Several gamefish species get most of the attention of avid anglers. But if you're wanting to put a few fish fillets on the camping menu, then consider fishing for a species often considered to be a beginner's fish: the bluegill. A stout, chubby bluegill is not only a fish for teaching a young angler the basics, it's also a tasty meal. The bluegill is the real deal in the gamefish world.

Also known as bream, sun perch, and copperbelly, along with some other nicknames, the bluegill is actually one of the most colorful and interesting gamefish found across the country and beyond. Spawning seasons will bring on a change of color for both the female and male, but a marking that is always present is the black dot located at the tip of gill cover. Other sunfish look similar, so take along a fish identification booklet (provided by many state department of natural resources) for more entertainment at the campground lake.

Locating bluegills is a simple task that can be accomplished by visiting just about any body of water with any type of structure. Structure can be anything from docks, sign posts and weed growth in the edge of the selected water body. The bluegill is a laid-back fish, that is, until it begins to feed. They are determined little fish when a feed source comes in contact with the school. Not exactly a fight, but a pushing for the front of the worm line occurs. The bluegill prefers a quiet water atmosphere, although it can be found in rivers and streams with slow current.

When spawning begins, about late April or early May, the bluegill prefers to "school up." The saucer-sized beds are built over gravel or sand normally, but the bluegill will construct its maternity site around plant structure if the bottom has no texture to hold its eggs. The average female will lay 2,000 to 60,000 eggs, which hatch in less than two days if not disturbed.

Bluegill will eat a variety of food sources, but their primary targets are insects and larvae. This food preference makes selecting the proper artificial lure a simple task. There are hundreds of artificial lures on the market that will catch bluegill also, but a plastic grub is a very productive lure. A small one-inch twister-tail type grub is the lure to keep in your tackle box. Lure color selection should match the water color your fishing. But if you want to only stock a couple of colors in the tackle box, make it chartreuse and white. Slide an 1/16 ounce lead jig head into a chartreuse grub and you have a productive set up.

The spring and early summer months can produce some "big gills." A large bluegill offers a fine and worthy battle for the angler, no matter what the age. The world record bluegill (IGFA) weighed nearly 5 pounds. The bluegill may not be the focus of many fishermen, but when you're after a few fillets for camp dinner, the bluegill is a legit fish.

Tips to Prevent Autumn Campfires From Turning into Wildfires

How to Turn a Rainy Day Into an Incredible Hiking Experience

Primitive Camping: How & Where to Camp For Free

Robert Loewendick is a freelance outdoor writer and guidebook author with work regularly published in magazines, newspapers and websites, both in the U.S. and in Canada. Spending days and nights surrounded by the natural world is not a hobby, but instead a lifestyle for Loewendick. Whether fly-fishing a mountain stream or cruising a Great Lake for angling adventures, hiking miles of tame trails or wild ones, paddling calm lakes or running rapids, Loewendick's days outdoors regularly end at a…