Finding and Fishing for Bedding Bream 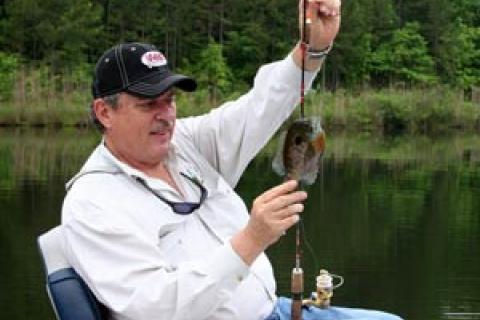 The angler quietly slips his boat along the shoreline, casting and retrieving a small bait a few feet off the bank. Several successive casts go unrewarded, then suddenly his limp line twitches and darts sideways. Alert to this movement, the fisherman sets the hook, then plays and lands a bluegill that's black and as big as a salad plate.

He deposits this fish in his live well, then he casts back to the same spot and catches its twin. With a sense of smug satisfaction, he realizes his search is successful. A colony of bream is nesting in this cove again this year, and now his fun will be nonstop until he spooks them away.

Bream on the beds! Nothing in fishing matches this phenomenon for sure-thing action and pure, unadulterated fun. When these pugnacious fish move into the shallows and start fanning nests, they are easy marks for anglers who know their ways and the methods to catch them.

Anglers like Jim Spencer of Arkansas. Spencer grew up fishing for bream (also called bluegill) in this state's sloughs and reservoirs. He says the peak of the bedding season comes around the full moon in May, and bream continue to spawn in lessening degrees through the summer months.

"I've studied the scientific literature on these fish, and in clear lakes, they'll spawn as deep as 20 feet," Spencer states. "However, usually they nest in shallow water, no deeper than 6 feet. The more color the water has, the shallower the nests will be. In some dingy oxbows, I've found beds in 12 to 20 inches. But I'd say the average nesting depth is 2 to 3 feet deep."

Finding bedding bream can be a needle-in-a-haystack proposition, but anglers can take shortcuts to confine their search. Spencer explains, "Bream like to nest on flats, a lot of times where there's something different — brush, stumps, lily pads, etc. So this is where I start searching for a bedding area. I'll look in protected coves with the right water depth relative to its clarity. Unless the water is extremely clear, I'll hunt for beds in 6 feet or less."

Spencer says bream beds may be located in any of several ways. Sometimes anglers can see the lighter beds in dark water, like pancakes scattered across the bottom. (Polarized sunglasses are invaluable for peering below the surface.) Tiny bubbles on the water may give away the presence of bream, which are stirring up the bottom below. Some bedding areas have a peculiar odor which veteran bream fishermen can smell. Or sometimes, especially in shallow water, an angler may spot the fish darting away from an intruding boat.

Most times, however, an angler must find bedding areas through trial-and-error prospecting. Spencer continues, "When I find a flat that looks good, I cast around any structure — vegetation, cypress trees, logs, brush. I just keep moving and trying different spots until I start catching fish, then I stick with it until it plays out."

Spencer uses ultralight spinning tackle for bream fishing. He prefers a short rod — no longer than 5 feet—and a reel spooled with 2 pound test monofilament. He ties a #4 long shank bream hook on the end of his line, and he baits with a 2-inch section of nightcrawler, which casts better than a cricket.

This is the entirety of his rig. He uses no additional weight and no float.

Spencer's method of fishing is ultra-simple. "When my bait hits the water, I'll engage the reel, then let the worm sink and watch my line for a bite. If I don't get a taker by the time the worm hits bottom (slack comes in the line), I'll reel it in and cast somewhere else."

However, if Spencer does get a bite, he casts back to the same place a second time. If he gets another bite, he knows he's located a colony of bluegill.

"The next thing I'll do is cast 20 to 30 feet out to the side," Spencer adds. "I search for the edge of the bed so I can fish from the outside in. I don't like to work the center of a bedding area first. I think the commotion caused by hooked fish scares the other fish around them.

"So I cast progressively to the side until I don't get a bite, then I start casting back toward the bream. This way I work the outside edge first," he said. "By using this method, I can take several more fish from a bed before they spook away."

Spencer says when action on a bed slow down, he leaves it to hunt for another bed. "I'll work it the same way, then return to the first one and fish it again. Generally, if you stay off a bed for half an hour, the bream will return, and then you can have another round with them." Spencer notes that bream routinely establish beds in the same spots year after year. After a couple of seasons, an angler can line up a repertoire of bedding sites, which reduces his searching time and maximizes his catching time.

"Things really get exciting when you find a bed of big bream," Spencer concludes. "You usually get a bite as fast as you can get your line in the water. The only thing you have to watch is losing count and catching too many. Here in Arkansas, the limit is 50 per fisherman, and you can go over this number pretty fast if you don't keep up with your total."

A Simple Guide to Choosing Lure Colors for Bass

How to Hunt Blue-Winged Teal in September

Why Deep, Cool Holes are Hotspots for Summer Crappie

Wade Bourne is one of America's best known outdoor writers/broadcasters. In the past 37 years, he has published more than 2,500 articles in America's leading outdoor magazines. He has hosted a daily syndicated outdoor radio show for 28 consecutive years. He has hosted outdoor TV shows on TNN (Advantage Outdoors) and The Outdoor Channel (Ducks Unlimited TV). He's also won numerous awards for his journalistic expertise.