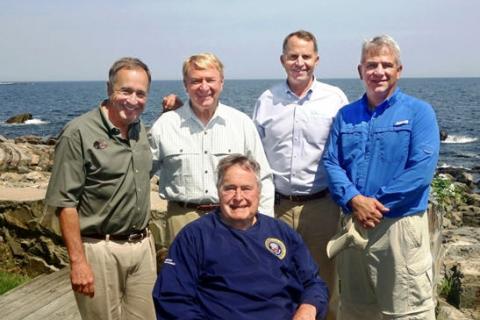 President George H. W. Bush is honored for his extraordinary record of supporting conservation and fishing in America and beyond.

Helping former President George H. W. Bush continue to celebrate his 90th birthday, a group of conservation leaders, headed by Bass Pro Shops founder and CEO Johnny Morris, gathered to go fishing with President Bush and to honor him for his lifetime commitment to conservation.

“All of us at Bass Pro Shops are proud to stand beside key conservation partners today to pay tribute to President Bush for everything he has done to uphold our hunting and fishing traditions as well as for his work to restore and enhance wildlife and fisheries habitat,” Morris said. “Most people aren’t fully aware of all that President Bush has done for conservation. During his presidency, he established 56 new wildlife refuges, more than even President Theodore Roosevelt, conserving more than three million acres of nationally significant public land.

“It is an honor to present my longtime friend with Bass Pro Shops Lifetime Conservation Achievement Award. President Bush is a remarkable man who has had an immeasurably profound, positive impact on our nation’s fish and wildlife resources. He is a passionate fisherman and sportsman whose well-known love of fishing has made him one of the best ambassadors the sport of fishing has ever had.”

Johnny Morris has witnessed firsthand Bush’s love of the great outdoors and his long-term commitment to the environment during many fishing trips with the president including remote tent camp outings to Newfoundland and Labrador, Canada; trips to the Arctic’s Tree River; the fabled River Test; bass fishing in Alabama; trout fishing in the Ozarks; and striper fishing in Maine.

Jeff Trandahl, executive director and CEO of the National Fish and Wildlife Foundation, used the June 17, 2014, event to announce a partnership to provide a one million dollar gift to the new President George H. W. Bush Conservation Fund. Created to recognize the president’s lifelong commitment to natural resource conservation, the Fund will support conservation projects that are important nationally and that can produce significant benefits for fish, wildlife, and their habitats. The Fund’s first effort, supported by Bass Pro Shops and National Fish and Wildlife Foundation, will go to support the Penobscot River Fish Recovery and Habitat Restoration project. This $2 million initiative will benefit important Atlantic Coast fish species including Atlantic salmon, river herring and American shad.

Another honor bestowed upon Bush at the celebration was the KeepAmericaFishing™ Lifetime Achievement Award in recognition of his leadership and lifelong personal commitment to recreational fishing and the conservation of our nation’s fisheries and wetlands.  This is the sportfishing industry’s inaugural award and is named for the former president. The award was presented by Mike Nussman, president and CEO of the American Sportfishing Association (ASA), on behalf of the recreational fishing industry and the nation’s 60 million anglers.  ASA is the parent organization of KeepAmericaFishing, which was launched in 2010 as a way for anglers to get involved in advocating for clean water, abundant fish populations, and plenty of places to go fishing.

At the gathering to celebrate Bush, the Recreational Boating and Fishing Foundation (RBFF) announced another $125,000 gift from Morris in Bush’s honor. This donation will be used to support RBFF’s new Hispanic outreach campaign. RBFF’s five-year plan is expected to increase awareness of fishing and boating among Hispanics, and engage the fastest growing segment of the U.S. population in these activities. Starting with a new Spanish-language microsite VamosAPescar.org (Let’ Go Fishing), the campaign aims to motivate the Hispanic audience, especially children, to partake in the joys of fishing and boating.

George Dunklin, Jr., president of Ducks Unlimited, also attended the event and presented Bush with a beautiful piece of waterfowl art, "Reydell Hole." He also shared a heartfelt letter from Ducks Unlimited CEO Dale Hall, thanking Bush for his many conservation achievements. Hall, who served as the director of the U.S. Fish and Wildlife Service during George W. Bush’s presidency, outlined how Bush Sr. was responsible for conserving millions of acres across the United States.

Bush established the first national policy goal of “no net loss” of wetlands, which replaces any wetland newly affected by draining or developing with another wetland of the same size and function. Through that directive, hundreds of thousands of wetlands have been avoided, mitigated or replaced across the United States.

Another great conservation accomplishment heralded in Hall’s letter was the North American Wetlands Conservation Act (NAWCA), which was passed by the U.S. Congress and signed by Bush in 1989. This legislation provided federal funding to implement the North American Waterfowl Management Plan in the United States, Canada and Mexico.  Each federal dollar contributed through NAWCA is matched by three dollars (on average) from partners such as Ducks Unlimited, private landowners, foundations, companies and other conservation groups.  NAWCA is considered by many to be the most successful government/private partnership in existence today, having funded more than 2,250 projects on more than 26.9 million acres in all 50 states, Canada and Mexico.

In addition to Morris, Nussman, Connolly and Dunklin, those attending the event to pay tribute to Bush’s conservation legacy included Tom Bradbury, executive director of the Kennebunkport Conservation Trust; and Ken Raynor, golf professional, avid angler and close friend of President Bush’s. Jeff Trandahl, executive director and CEO of the National Fish and Wildlife Foundation, participated in the event by phone. The awards were presented to the president after he and the rest of the group enjoyed a great morning of fishing off the coast of Maine.