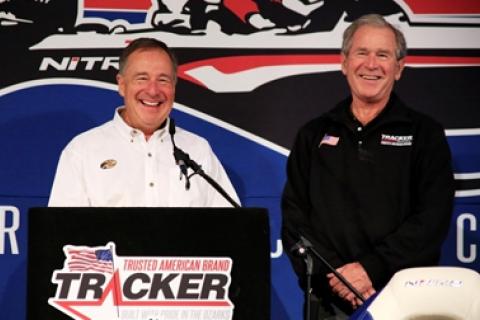 Invited by Bass Pro Shops and Tracker Marine Founder/CEO Johnny Morris, Mr. Bush delighted attendees from the United States and around the world including such faraway places as Australia, Russia, China and South Africa with stories about his and his family’s love for fishing and their passion for the outdoors. He also spoke about his administration’s work to protect water quality and natural resources. While in the White House, Mr. Bush restored, improved or protected more than 3 million acres of wetlands and created wildlife habitats through the North American Wetlands Conservation Act and other cooperative conservation efforts.

”We pioneered a new model of cooperative conservation in which government and private citizens and environmental advocates work together,” said Mr. Bush, a longtime family friend of Morris.

Morris praised the president for initiating many conservation efforts that helped protect wildlife habitats and water quality. One example is an Executive Order Mr. Bush signed to conserve as game fish two of America's most popular recreational fish – striped bass and red drum – for the recreational, economic, and environmental benefit.

“We are inspired by and grateful to Mr. Bush and his father for their shared love of the sport of fishing and for their leadership and commitment to national conservation efforts,” said Morris. “His efforts help ensure recreational fishing opportunities continue to exist for us and future generations. We are very proud that the president fishes out of his own Bass Tracker boat on his ranch in Texas.”

During the conference, Morris presented Mr. Bush with Tracker Bass Force One, patterned after Air Force One.  This special boat was made at the Tracker Plant in nearby Lebanon, Missouri. Tracker is the first boat, motor, and trailer package designed just for anglers and introduced by Morris in 1978. Tracker has remained America's #1 selling fishing boat for more than 36 years.

Morris and Bush shared fishing stories and laughs with other bass fishing legends Bill Dance, Roland Martin, Jimmy Houston, Kevin VanDam, Rick Clunn, Charlie Campbell and others. On a more serious note, the president also answered questions about his time in office and shared his insights and discussed his new book “41—A Portrait of my Father,” due Nov. 11, 2014. The group then enjoyed lunch in Arnie’s Barn at the resort’s TOP OF THE ROCK HERITAGE PRESERVE.