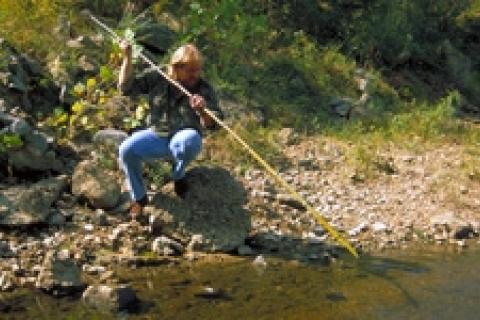 Should you ever find yourself thrust into a survival situation — you get hopelessly lost, your vehicle breaks down in the backcountry far from help, your bush plane crashes in remote territory, etc. — you will need to deal immediately with serious concerns such as treating injuries, creating shelter, attracting the attention of rescuers and obtaining water. Obtaining food, if you do not have any, is much farther down the priority list. You probably can live for days, perhaps weeks, with little sustenance.

If your unfortunate situation continues days instead of just hours, however, food becomes increasingly important. Having something to eat helps the survivor maintain a positive attitude and healthy condition. Without it, your struggles will be much more difficult.

If you are stranded near some type of water body — a lake, river, creek, pond, bay or the ocean — catching fish may be one of the best ways to satisfy your hunger. Almost all fish are edible and most are delicious and nutritious. In his "Complete Book of Outdoor Survival", J. Wayne Fears, one of the country's foremost survival experts, states, "I am convinced that fish is the best source of edible wild food in North America for the person in a survival crisis. Freshwater lakes and ponds, streams, creeks and rivers are abundant food reservoirs."

If you've following the old Boy Scout motto, "Be prepared," perhaps you're fortunate enough to have a survival kit with you and stocked it with an assortment fish hooks, lures and line. If so, wonderful. You're ready to start catching fish. But what if you have no fishing tackle? How can you catch fish then?

This task probably won't be easy. But with the knowledge you'll gain reading this article, you'll be better prepared to catch fish to eat.

Start by learning these key facts:

Hooks can be improvised from many materials, including needles, safety pins, nails, paper clips, thorns, a bird wishbone or claw, a piece of metal cut from a can, even an old soda can tab. Don't overlook any possibility.

If a knife is available, you also can whittle hooks in the traditional shape from wood, shells or bone. A simpler type of hook — the gorge or toggle hook — has been used by primitive people for centuries. This is a short (1 inch or less), straight piece of hard material, such as bone, antler or wood that has been sharpened at both ends and slightly notched in the middle where it's attached to the line. The gorge is hidden inside a piece of soft bait, and when a fish swallows the bait, the fisherman pulls the line and the gorge turns (hopefully!) sideways, lodging it in the fishes throat.

Fishing line may be harder to procure but can be made from many materials that might be on hand, including threads in clothing and equipment, pieces of wire, dental floss, sinew from the leg of a deer, twisted bark or whatever else is available. Most good survival books offer tips on improvising.

You can make lures from pieces of cloth, feathers, an earring or bits of bright metal fashioned to imitate natural food like a minnow or insect. In many waters, all you need to catch fish is a strip of colored cloth attached to a hook.

Your improvised gear can be fished with a makeshift pole or as a hand-line. Any extra should be used to create setlines that will fish while you are away. Attach each to a stake driven in the ground beside the water or to springy green branches overhanging the water.

You also can use "bobby poles" for fishing while you are away. These are straight willow shoots or canes pushed into the bank. Cut them long enough to reach well out over the water when stabbed into the mud at an angle. Then add a hook and line, bait it and drop it in. Several can be made and set, then left to work while you attend to other things. Check as often as possible to remove your catch and rebait.

There is practically no end to the makeshift spears you can concoct. A sharp piece of bone, wood or metal can be lashed on as a tip, or you can simply whittle the end to a sharp, barbed point. This type of spear is very effective when used at night with a torch while wading shallows.

A jawed spear may provide a better way of capturing fish. Split one end of a long green willow pole or other sapling 6 to 8 inches on one end. Carve sharp, rear-angling teeth into each flat side in the split. Use cordage to bind the split's upper end so it won't split farther. Open the "jaws," and prop them open with a twig strong enough to separate them 2 or 3 inches. When you thrust the spear down over a fish, the twig is knocked out, and the jaws snap shut, holding the animal.

The advantage of spearing fish is you can select larger fish. However, this method requires a lot of patience and practice for success.

To catch fish in tidal waters or rivers, consider using a fish weir constructed the way Native Americans did it centuries ago. Begin by driving stakes (longer than the water is deep) side by side into the bottom in shallow water to create a rectangular fence with three sides. The fence's open end should be on the downstream or downcurrent side. Next, drive more stakes to create a V-shaped wall that points into the open end of the rectangle. The point of the "V" should be left open so fish are funneled into the weir. Such a trap also can be constructed of rocks placed in similar fashion. Fish that are trapped inside can be caught by hand or speared.

The trap's size will depend on the material at hand and the size of the water in which you're working. Even small ones work well. The best have side walls extending to the bank that allow fewer fish to pass. In muddy water, try herding fish into a trap, starting downstream and driving the fish in front of you.

If it's not too cold, and you can find undercut banks, holes beneath rocks, hollow logs and other dark recesses in shallow water, you may be able to catch fish by hand. In many parts of the country, this is called "noodling," and it's an excellent way to catch catfish, suckers and other species. Try to block the hole so the fish won't shoot out, then reach inside and move your hands along the fish's side until you can grasp the mouth or gills. You also can spear fish in holes, or catch them with a stout hook attached directly to the end of a pole.

In small bodies of water where minnows and other small aquatic animals are plentiful, a fishing net improvised from a shirt or other piece of cloth stretched between two sticks can be effective. Push it before you as you work your way toward a small cove or bank. When you reach the shallowest water, lift it quickly and remove the catch. At times, this method yields more food than fishing with hook and line.

Primitive people have long used certain plant parts to poison or stun fish. Mullein and buckeye, both common in many parts of North American, are reported to stupefy fish when the leaves, stem, flowers and in the case of the buckeye, the nuts, are crushed and dropped into small shallow pools. The crushed green hulls from black walnuts and lime made from mussel shells cooked in a fire and crushed are said to work in similar fashion.

Unless you can keep them alive in some type of trap or on a stringer, all freshwater fish should be cooked as soon as possible after catching to avoid spoiling. Many contain parasites that make them dangerous to eat raw, so cook your catch by steaming it in a wrapping of leaves, boiling it in a makeshift cook pot, broiling it on a sheet of scrap metal or roasting it on a stick.

Another quick way to cook fish outdoors is sealing it inside a coating of fine, sticky clay. If the clay isn't already wet, work it with water until it reaches the consistency of stiff dough. Then mold it about an inch thick completely over the whole fish. Bury in hot coals until the covered fish resembles a hard, hot brick. Baking will take about 15 minutes per pound. When you break open the clay shell, fins and scales will come off with it, leaving a steaming, savory feast.

If you find yourself in a survival situation, the fish you catch and cook yourself may provide the best meals you've ever had.