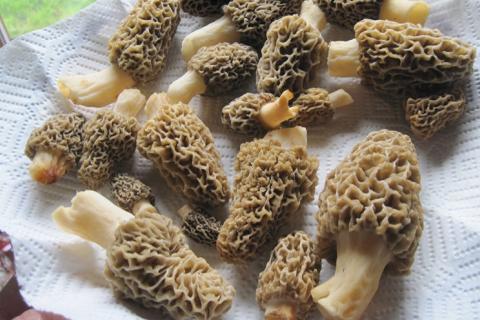 How You Can Find Morel Mushrooms this Spring!

If you’re a spring turkey hunter, particularly in the Midwest, you’ve probably run across other hunters in the woods who are definitely not turkey hunting … at least at the moment. They are walking very slowly, usually in small circles. They exhibit a stooped, head-down posture, but they don’t have their smartphones out. They are intently looking at the ground for something, and sometimes they are poking through the grass and fallen leaves with a walking stick.

In case you didn’t know, these folks are mushroom hunters. Often, they are dressed in full camouflage clothing and have a shotgun slung over their shoulder. That’s because, until a few minutes ago, they were turkey hunting just like you, but then discovered a morel mushroom among the leaves. And when that happens, all turkey hunting usually stops until all the mushrooms in the area are gathered! At least that’s the way it works with many turkey hunters.

Prime morel mushroom season often coincides with prime turkey season in a large portion of the center swath of the United States.

If you’ve never experienced morels – either finding them or eating them – you have two great outdoor joys in your future.

Morels are edible mushrooms, that don’t look anything like the ones that illustrate children’s fairy tale books or the cultivated button mushrooms commonly topping your pizza. Instead, morels look more like a cone-shaped sponge on a short stem. And that’s one of the beautiful things about morels – because of this unique appearance, they are the most easily identified edible mushroom.

There is a mushroom called a false morel that is not edible, but when you compare them side by side with edible morels, it’s pretty easy to tell them apart. The cap of the edible morel is more open celled like a natural sponge while the false morel cap has a more closed structure that looks a little bit like the surface of a brain. Edible morels range in color from dark gray through a golden white/yellow, while false morels are most often brown or dark orange in color. If you just aren’t sure, check inside the cap. The edible morel’s cap is hollow, and the false morel’s is solid. If you still aren’t sure, just leave that patch of mushrooms and move on.

Before you go into the field, check out some reference books or watch an online video or two. The best way to learn is to go with an experienced mushroom hunter, but that’s easier said than done. Morels are highly coveted and productive locations are kept secret, but maybe you’ll convince a friend to give you a call after a successful hunt so you can see firsthand what they look like.

Where Will You Find Morels?

Where’s the best place to hunt morel mushrooms? The answer is where you find them!

While morels are often associated with trees, sometimes great patches can be found on grassy pasture land, railroad grades, or powerline cuts. Most important is moist, but well drained soil. You will seldom find morels where there’s standing water or mud.

Most veteran mushroom hunters are convinced morels have a connection to certain species of trees such as elm, hickory, ash, sycamore, and oak. A southward or westward facing slope with recently dead elm trees will give a morel hunter goose bumps! If the bark is still on the dead trees, this spot could be a gold mine. But if the trees have been dead so long the bark has fallen off onto the ground, chances are you won’t find a thing.

If you find morels one year, it’s likely you’ll find them nearby the following seasons, too, just seldom in exactly the same spots. Properly harvesting the morels can help promote their growth the next season, but we’ll get into that in a minute.

When Will You Find Morels Mushrooms?

The “season” for morels generally progresses from south to north in their range. It often does coincide with turkey seasons. In the far south, morels will begin popping in late February or early March and the season can run well into May or June in northern zones like Wisconsin, Minnesota, New York and other places.

The key is soil temperature. Morels will begin to pop up when soil temperatures reach about 52F degrees. That’s difficult to judge, so watch for a string of five to seven nights when the air temperature does not drop below 50 degrees. Combined with a good rain or two during that time, the morels will seem to suddenly appear out of thin air.

There’s also the old adage that you’ll find morels when the leaves on the oak trees are the size of squirrels’ ears or the blooms on the lilacs start to swell. But the pros’ tip is to start checking early and check often because if you’re the second person to find a patch of morels, you won’t find them!

While morel hunters are tight-lipped about where they find mushrooms, many like to show off their harvests and are willing to keep others posted on when the morels are popping. There are numerous websites and online forums that can help you keep track of where mushrooms are popping.

When and How to See the Edible Morel Mushroom

The color of edible morels range from nearly black through gray to kind of a golden yellow. But no matter which color they are, they can be incredibly difficult to see among the fallen leaves.

The earliest to appear are the blacks and grays, and the cap can be as small as your thumbnail. As the season progresses, the morels will grow and become slightly easier to see. However, you must remember as they get easier for you to see, they get easier for the other mushroom hunters to see as well.

The last to show are the yellows, and these morels can be big! Watch Facebook or Instagram during prime morel season and you’ll see postings of yellows with caps as tall as 9 or 10 inches! Finding a patch of those big ones is as close as it gets to heaven on earth for morel hunters.

How Should You Pick Morel Mushrooms?

How you harvest morels is important. If you do it carefully, you can boost the odds of success in the same area in seasons ahead.

Morels don’t really have roots, but the key is that you leave the equivalent of the root in the ground. So don’t pull the morel. Instead, either cut it off just above the base with your pocket knife or grasp it near the bottom of the stem and simultaneously pinch and twist. This way the mushroom and stem will come away and the stub will stay in the ground.

The best thing to carry your harvested morels in is a mesh bag. The kind that onions or potatoes come in at the grocery store are okay, but even better is something with a softer finish. While a morel hunter will be intentional about bringing along a bag, the incidental morel hunter might not. So, make sure there’s a mesh bag permanently stowed in your turkey hunting vest, otherwise you will end up using your cap, head net, or shirt to haul home the forest’s bounty … but that’s not all bad either.

Tip Watch Video: How to Preserve Morel Mushrooms by the Food Channel