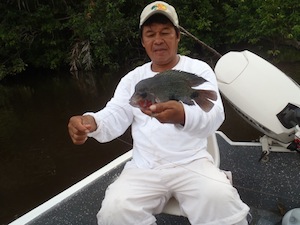 Please pardon the redundant report. Hampden-Sydney College, where I perform two seminars yearly, asked for an after-graduation trip to Central America. This trip would be open to family members as well as the students -- a good opportunity for the father-son type trip and a great graduation present for seniors. The dean of students joined us, and the entire group had a marvelous time.

I had prearranged avenue with Dr. Alfredo Lopez, the CEO and on-location manager of Rio Indio Lodge, along with Mike Lilla, fishing manager, to offer an educational calendar that would include half of each day clearing paths in the jungle and half a day guided fishing. The path would be available to the local Rama Indian tribe to take visitors on nature walks explaining the jungle flora and fauna.

The Rama Indian guides in the jungle and on the water offered an insight into the ECO Lodge’s offerings … we left only footprints! The path cleared will have a sign at its entrance with credit to the Beyond the Hill participants. This denotes the college's intention to prepare the students for how to assist those willing to help themselves to cope with everyday life after college. It has worked extremely well in several other Central American countries. There are plans to make this an annual trip, stretching the helpful activities to the nearby Rama Indian village.

Now for the fishing -- my part of the program. I had explained how the jungle species are found in different locations at different times of year. The fish we targeted were Mojarra, Machaca and Guapote. When waters are high during the rainy season, the fish are scattered throughout the vast jungle and are almost impossible to fish for. As the dry season progresses, the bait fish are driven into concentrations in lagoons and rivers. The best season to target the aforementioned species is March, April and May. We were on the end of the dry season and did not expect excellent fishing … what a surprise!

We were armed with nine-foot fly rods, high-capacity reels, nine-foot leaders and a variety of surface flies that included grasshoppers and popping bugs in various colors. The poppers in solid white or solid black were the most successful. We would fish casting to shore cover near the overhanging trees. All the gear was furnished by the Bass Pro program and worked well. If you want to know models and weights, please get in contact at www.hanoverfly.com.

There was no evidence that the Guapote I had enjoyed catching the month were still around. A few Machaca were a nice addition to the afternoon fishing with popping bugs. These fish are equipped with molars to crack nuts fruit or masticate foliage and blossoms. This food source finds the fish waiting below towering Fig Trees … but these fish are also carnivores! There explosive, lightning-fast strikes often result in broken or cut leaders, but if hooked, put up a marvelous battle.

The Mojarra is a brute cousin of our North American Bream. The fish has fins that end in delightful points, making it look like it was styled in India. These fish are much thicker than our Bream and real street fighters when hooked. They wait in ambush near logs and vegetation to dart out to take naturals. They eat minnows as well as insects. They are

We had an instance when around a 10-pound Snook tried to wrestle a hooked Mojarra from the line with no success but provided a heart-stopping moment for an entry-level angler. The Snook are in sizes to 20 pounds a bit later in the year. In September, they are in evidence in the lagoons and rivers along with a huge migrating run of Tarpon. Fishing for them while residing at the lodge is minutes away where the Rio Indio River exits into the Caribbean Sea. The sea is calm during that month.

I shall return with client friends in September and shall report on that fishery after that. Now I must change the travel bag to accommodate gear for first Alaska, where I will target the Coho (Silver Salmon) in early August, and later that month, to Montana during the "Hopper Season,” a yearly favorite.

The picture above is of lodge guide Santos Duarte holding an average Mojarra near two pounds.