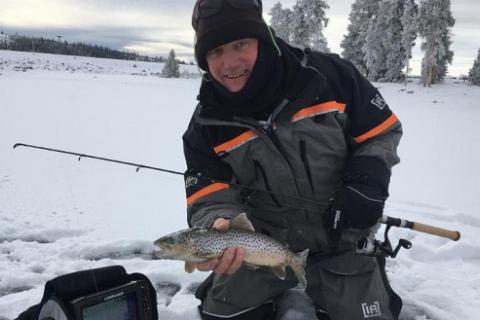 Fluctuating water levels can throw winter trout anglers a curve on lakes across the Ice Belt. But they don't have to keep you from putting fish on the ice. Armed with the right approach, you can still enjoy banner catches whether your favorite lake is high, low or somewhere in between. 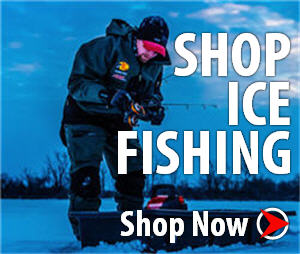 "Rainbows and brown trout are shoreline-related fish from first ice to the early midwinter period, regardless of the water level," says veteran trout guide Bernie Keefe of Granby, Colorado. "The trick to catching them is identifying areas along the bank that concentrate forage and predators."

To be clear, Keefe doesn't advocate chasing the next bite where water levels are in a major state of flux. "Rapidly rising or falling water can create seriously unsafe ice," he warns. "Instead, focus on lakes where water levels have stabilized for the winter."

To get a handle on lake levels prior to your trip, Keefe suggests checking the websites of state departments of natural resources or federal agencies like the U.S. Geological Survey or U.S. Army Corps of Engineers.

"That will give you an idea of what to expect when you arrive, or perhaps encourage you to try a different lake where conditions are more conducive to your mode of access, on-ice transportation and style of fishing," he says.

"When you get to the lake, look for structure with universal trout appeal, such as inlets, car-sized rocks sticking out of the water along a rocky bank, or a point next to a bay," he continues. "And if you'd rather play the numbers game than 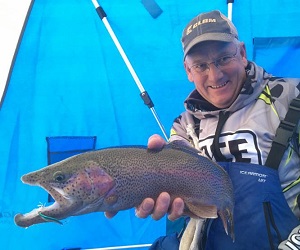 hunt for trophy fish, don't overlook the backs of muddy bays, where an abundance of insects and crayfish can attract big numbers of small to medium-size trout."

"Where weeds are present, look for trout along the deep and shallow weed edges, as well as open pockets within the weedbed. "But keep in mind that if the lake you're fishing drops 20 feet or more a year, weeds most likely won't be a factor."

Depth is a constant concern, regardless of the structure or cover. In general, Keefe targets water less than 10 feet deep. "You'll occasionally find 'bows and browns deeper right now, but a guy can make a living in the 3- to 10-foot zone.

Fishing Tackle and Tools of the Trade

Once Keefe keys on a potential hotspot, he reaches for lures proven to attract trout and trigger strikes. "Berkley Fishing Atomic Tubes are awesome," he reports. "So are Clam Outdoors Leech Flutter Spoons. You can tip the spoon with a waxworm if you like, but you don't have to, because this is more of a reaction bite."

He recommends choosing lure colors on the gaudy side of the spectrum. "Don't be afraid to go wild with bright oranges, flashy metallics, prism tape, the whole nine yards. "Rainbows in particular are suckers for an underwater disco ball."

Where multiple lines are legal, Keefe favors a two-fisted approach. "Drill two holes 30 inches apart. "Deadstick a Clam Drop Jig loaded with waxies a foot or two above bottom in one of them, and jig a Clam Flutter Spoon up and down the water column in the other.

"Keep a close eye on the dead rod. "Trout are attracted by the spoon, but they often hit the easy meal first. This is especially true with large fish."

If the spoon is a tad too flashy, Keefe tones down the presentation. "I replace the spoon with a second Drop Jig," he says. "Then I take turns fishing each of the jigs in a circle for 30 seconds or a minute, while the other jig is at rest. A lot of trout come in and drill a jig that was moving, just as it settles down."

Timing is as important as being in the right place, Keefe notes. "This typically isn't an all-day bite, so plan on setting up shop early in the morning," he says. "This pattern often grinds to a halt once the sun hits the ice or shortly thereafter." 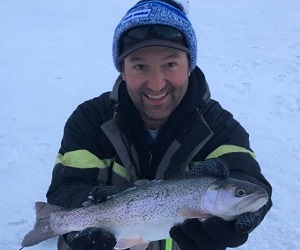 After that point, you can pack it in and head for shore. "Or, you can drill a series of holes down the bank and leap-frog with your two rods on the hunt for sulking fish," he says. "The fish are relatively inactive, so you virtually have to drop the jig on their nose to get bit. But it's a great way to pick up additional trout you'd miss if you called it quits."

Thanks to the late freeze-up, these shoreline tactics are producing trout on lakes high and low right now, and will continue to do so into midwinter. "By mid- to late winter, many of the fish move away from the bank and suspend over deeper water," Keefe says. "But that's a story for another day."