Stop Shouting At Your Hunting Dog! 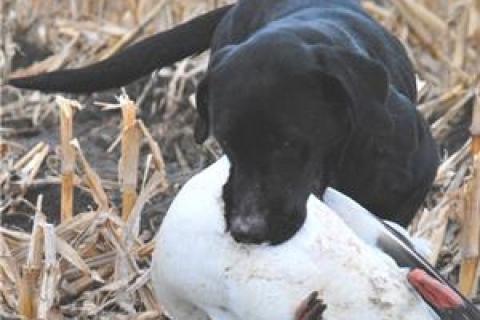 Dog Training Tips Minus the Drama

It was the first time I sat in a duck blind with the guy. A stranger to me, he wanted to impress the rest of us with his tales of expensive guns and impressive shots. My guard went up when he began barking senseless commands at his high-dollar yellow Labrador as soon as he let the dog out of the truck. The dog was beautiful and obviously high bred, but his owner badgered him relentlessly.

“This dog just needs some control from his master,” the gentleman yelled, between a run of useless commands of “here,”  “heel,” “sit,” “get out,” and other confusing rants. Frazzled by the barrage of loud voice and whistle commands, the young dog soon had enough.

The owner, of course, snap shot the first teal that buzzed the bird decoys. The shot belonged to the fellow on the left end of the blind. Regardless, Mr. dog owner began another barrage of voice commands, insisting his dog retrieve the downed bird. After a couple of minutes of shouts and insults, the retriever half-heartedly tromped through the marsh, picked up the duck, ran to the nearest thick cover and ate the teal.

Unfortunately, that guy was not unique. I have witnessed his type of behavior toward gun dogs many times over. Nagging a hunting dog never achieves desired results.

Too much noise and distraction confuses gun dogs. The result is an interruption of the process of dealing with birds, which is a dog’s primary desire. When communications between handler and dog begin to break, performance suffers. All too often, owners then begin to shout more commands in an aggressive tone, which further ensures the dog’s failure.

Dog owners exhibiting excessive control over their best friend is a sure sign of their lack of faith in their dog and the owner’s neediness for ego trips.

A common problem these owners exhibit is shouting commands as soon as the dog begins a retrieve. Allowing a young dog to work out its own mistakes helps build confidence from the experience.  The hunter who tries to control the dog’s every move creates confusion for the dog and ultimately fear of reprisal from the owner and eventually, failure. And, more often than not, the owner blames the dog.

No Place for Anger

There is no place in the training phase, duck blind or pheasant field for anger expressed towards a dog. It takes time to train a dog properly. Beginning sessions should be short and fun. Too often, puppies are set up for failure by owners who pressure them immediately. A puppy getting its first whiff of a planted bird is going to be exuberant. Shouting at the puppy in an attempt to guide it to the bird creates confusion. Continuing to shout “whoa” as the pup approaches the bird adds to the confusion. Allow the puppy to use its natural instincts to find and point or flush the bird, according to its breeding.

Puppies that are set up for failure by their owners often reap owners’ wrath as well. Puppies will learn quickly from their mistakes and soon realize that they can’t catch birds.

Frustration and anger in the field always produces little for the dog or the owner and even less for hunting buddies. Our frustrated duck blind companion succeeded in ruining a perfect day of duck hunting for everyone. And the expensive Lab became a house dog.

If you want a happy, successful hunting dog, relax and let your dog work. The dog will relax with your lead, learn quickly and provide years of enjoyment for both of you.

What you feed your hunting dog is another important factor in their performance. Check out this article to learn more about the quality of your dog food at Bass Pro Shops 1Source.

3 Ways to Develop Safety and Trust with Your Hunting Dog