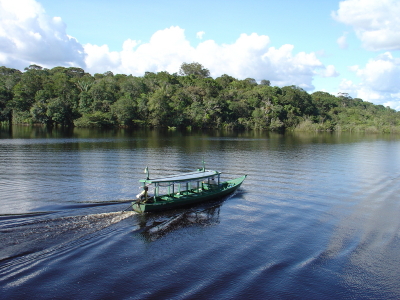 Earlier this year I spent a week in the Amazon rainforest arranging a trip through Sweetwater Travel, longtime friends in the trade, to secure eight spaces in a fly-fishing-only lodge located 300 miles north of Manaus, Brazil, deep in the jungle.

My biggest shock came when I found we would be landing our included charter from Manaus on a paved, 3000-foot runway just 200 meters from the lodge!

The owner has completed quite a feat, using barges when the river levels allowed to bring in materials and building six air-conditioned guest houses, complete with private baths. Each guest house can accommodate two guests. Covered porches invite private afternoon cocktail hours, with views of the river and surrounding foliage from the comfort of a surrounding manicured lawn. There is a freshwater filtered swimming pool with attended bar at poolside at the end of the day.

There is a main building where meals are served buffet-style on a banquet-sized long table. The food is excellent, with two entrees and a varied selection of side dishes for the evening meal. Fresh fruits from the jungle were a mainstay, as well, at all three meals.

Most fishers voted to take along lunches and not return to the lodge, but instead, select a shaded spot at midday and then rest a bit in a hammock strung between trees provided by the guide. The guides have an imposed brief siesta stay in the boat using life vests and cushions for comfort.

The weather was hot when the wind died, as we were very close to the equator. I had visited this area on other rivers, but now was in the only fly-fishing-only, AC-equipped facility within hundreds of miles.

There were no bugs! The acidity of the dark but clear river will not support larval growth necessary for the normal annoying and dangerous insect bites found in most swampy areas. I saw or heard less than half a dozen mosquitoes the entire week! There are small no-see-ums that wait for the rare drop in the wind to swarm about, but normal applications of repellant keep them at bay.

Now, the fishing. We fished two to a boat, guided by Portuguese-speaking guides who poled from a raised platform, spotting fish and pointing excitedly. We rotated through a prearranged schedule, but the guides used the same areas each week and knew them well. It was great fun, and all seemed to like their job of making a pleasant, successful day. The language barrier was sometimes a problem and slightly annoying, but did not ruin one hour during my stay.

There are three patterns of Peacock Bass in this region, though some say they are all the same species in different phases of development. There is the most widespread, called a Butterfly, with a rich, dappled-green background with three distinct spots of bright yellow bordered in black down each side. This trip, I learned they can weigh 15 pounds, but never before had I witnessed one over 6 pounds.

There is the Paca, which is gunmetal gray with ivory-colored dots in a distinct pattern and rows of stripes running vertically down the fish’s side. This is supposed to be the best fighter of the lot, but that is a very fine line of judgment! Twelve pounds would be a large specimen.

Last is the brash, gaudily colored Royal fish, with a splash like spilled India ink behind the red-orange eye, wide black bar stripes vertically and a black dot near the tail. It’s a lovely animal, and the one that gets the largest, weighing 25 pounds.

There are 25 other species, and we caught many.

On previous trips, I had enjoyed decent catch numbers daily, but 8 pounds was my largest. I was in and out, sharing boats with those who threw bait casting lures with large propellers  that were very effective. This trip, we used 8- to 10-weight single-handed rods and large, wide arbor reels with copious amounts of backing. The leaders were 40-lb. test straight or tapered material. I chose fluorocarbon and was satisfied with the results but did take extra care with the knots, which is necessary with that material.

I was most comfortable with an 8-weight floating intermediate line. I fished primarily with a Temple Fork Outfitters Axiom model rod 8-weight, 4-piece. It handled the casting and fighting of the fish beautifully.

The flies were large in some cases: nine inches long with flat prismed eyes glued on. Some were tied with gaudily colored chartreuse, red and yellow feathers, and sparkle strips added to their appeal. Some used poppers with success, but I did not explore this. These ambush predators were found near dense cover in packs, not schools. They chased bait fish relentlessly into shore, surrounded them and slashed back and forth, scattering their poor intended victims. This activity could be seen and heard at great distances and drew Caimans (alligator cousins) and fishermen as well.

At times, we fished the edges of sand bars with deep, dark water drop offs. The fish could be seen as promised. Each boat would land 20 to 30 fish a day, from 2 to 19 pounds -- which was the largest for the week. Ten- to 15-pound fish were  common. Their street-fighter frantic runs and jumping was a thrill and many saw their knots from line to backing never seen before.

While fishing, three different lucky guests glimpsed jaguars. We all saw many Giant Macaws, and the smaller birds were a joy to see and hear. Butterflies with gorgeous colored patterns on their wings were everywhere we went. A Tapir came almost nightly and had little fear of man; the chef had tamed him with treats.

I look forward to my return next year mid-January, when the waters of the Agua Boa will be at low levels to drive the bait fish into lagoons and the main river from the surrounding jungle, with the Peacock Bass right behind them. Hit this timing right, a stout rod, reel with lots of backing and a reel with deep spool of backing and smooth drag -- and a rabbit's foot -- and you experience some delicious sport in a lovely spot.

Tagged under
All Seasons
Read 3,744 times