Fishing and the Color Game 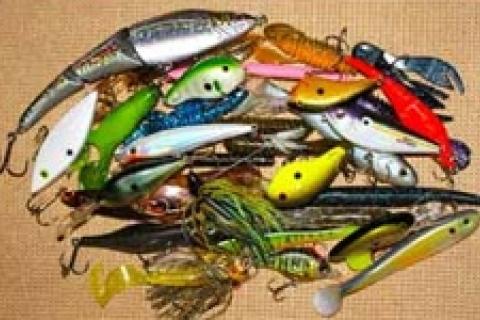 The old adage states that fishing lures were designed to catch fishermen and not fish — and each of our tackle boxes certainly support this theory. Manufacturers continually cast lures at us in every shade under the sun, and being the tackle junkies that we are, falling hook, line and sinker is unquestionably inevitable.

But the fundamental inquiry remains. Does color really make a difference to fish?

The Eyes Have It: Fish See Color

Most species of fish possess similar characteristics within their eyes much the same as humans. The retina contains two types of cells — rods and cones. Cones allow a fish to see color, and are the cells used for daytime vision. Once darkness falls, a fish will rely on their rod cells, which cannot differentiate color, but can sense light intensity, and are responsible for black, white and grey vision.

"Different fish species differ considerably in what colors they can see, and hence what colors they see best. Fish like bass, bluegills, crappie, walleye, and perch are mostly limited to the spectral range of red-orange and yellow-green. They have very little if any color vision in the range of blue and violet. Their best color vision (i.e. the area where they have the best discrimination between fine differences in color hue) typically peaks in the range of red-orange, with a secondary peak in the yellow-green range. Fish like trout and carp have a broader range of color vision. Certainly bass use color vision more than do walleye. While both species have color vision, and see roughly the same color spectrum, because bass have a higher concentration of cone cells, they would rely on color vision more than walleye."

The color of a fishing lure is the result of the color of light it reflects. As this light penetrates the water column in wavelengths, colors begin to be absorbed as the depth increases. Red produces the longest wavelengths, followed in order by orange, yellow, green, blue, indigo and violet. Those colors with the longest wavelength are absorbed first, meaning the hue fades and gradually appears black much quicker than all other colors. Warm colors are first to go, while cool colors hold on to their hue longest.

Light intensity also plays a big part in how a fish perceives the color of a lure. Fishing on a sunny day will allow light from the sky to penetrate much deeper through the water column than on a day with clouds, giving your colored lures a greater range of visibility and to much greater depths.

Shiny lures such as silver and gold are less effective when cloud cover rolls in, and can become almost invisible without the sun shining, even in clear water. The reason for this is they reflect the grayness that is surrounding them, instead of the bright rays of the sun. Tossing dark colors during periods such as this will often work best, giving your lure the greatest contrast and silhouette.

The Clearer the Water the Better Fish See

Largemouth bass see colors very well to a depth of about 5 feet when water clarity is good. Since the majority of their prey resides in shallow water, duplicating or "matching the hatch" of the predominant baitfish (generally shades of silver, white or perch) can be advantageous. Once that same depth of water becomes stained and vision is restricted, a switch to brighter hues — chartreuse, red, orange — will often put the odds in your favor. Although all colors are absorbed quickly in this circumstance, orange lures like Bass Pro Shops XPS Lazer Eye Hard Baits Shallow Crank Fire Crawdad and red lures like the Bass Pro Shops Bass Teaser Tubes CC Melon Slice will still be most visible when underwater. Chartreuse is a close second. If the

The ability for a fish to see a lure has a lot to do with background color. If fishing a green-colored lure in thick vegetation or in algae-stained water, although it may appear natural, a fish may struggle to spot it. More often than not, we actually camouflage our baits without knowing it.

A key in these situations is to choose a lure that contrasts against the background you are fishing. Two-toned lures are an excellent choice when faced with this dilemma.

The Color Correlation With the Fish Predator to Prey Offering

Fish are highly intuitive creatures. They know what they want to eat, and oftentimes, will actively search out a preferred prey, all the while bypassing less favorable items on the menu. Walleye feeding on perch or smallmouth bass on crayfish are tuned in to the nuances of that specific prey and rely on the recognition of body shape/profile and color to hunt each morsel down.

"One way fish use color vision is in recognizing specific visual patterns," Jones said. " As a fish grows, it gradually accumulates distinct mental images of objects that are important to its survival. Color, or rather color patterns, play a big role in fashioning those mental images, helping to separate one image from another. That is huge when it comes to discerning one prey species from another or avoiding specific predators, since the appropriate behavioral response is highly dependent on what the prey or predator is."

Matching the hatch is a term originating from fly fishing circles and is an important consideration when discussing color. It only makes sense that by offering a sportfish a lure that mimics the exact colorations of their desired target, that the end result will be that of a positive one.

Working clear water is also a time to experiment with natural colors, and as mentioned earlier, those that contrast the background surroundings. Clear water allows a fish to inspect a bait more closely, and as opposed to murky water and reactionary strikes, the more time a fish can give your lure the once over is the more reason to make it appear as lifelike as possible.

A Guide to Choosing Baitcast Reels

Simple Tips for Cleaning Your Boat From Top to Bottom

How to Rig a Wacky-Rigger Worm on a Drop Shot

Justin Hoffman is a freelance outdoor writer and photographer, with a fishing specialty, based in Ottawa Ontario, Canada. A graduate of the North American School of Outdoor Writing and currently a field editor with Ontario OUT OF DOORS magazine, outdoor pursuits with a journalistic approach keep him returning to the field week after week. A well-established freelance writer since 1999, Justin has publishing credits in many North American magazines and web sites. His photographic stock work…