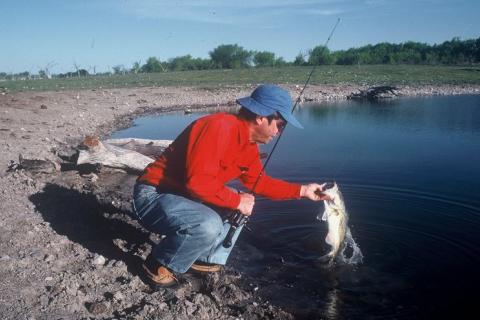 The humble grub is one of the simplest fishing baits ever invented. But it’s also one of the most versatile lures you can tie on your line. It will catch bass and a variety of other gamefish in almost any fishing situation. No wonder some anglers call it the “day saver.”

Many lures are niche offerings that perform best in a specific, narrow situation. But if you want a fishing lure that will almost always catch bass and other gamefish consistently, tie on a plain old grub bait. 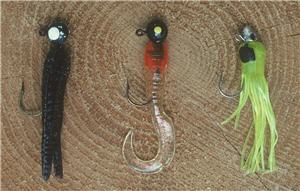 What Exactly is a Grub Fishing Lure?

A grub is simply a tapered, cylindrical soft plastic lure, typically with a paddle or twister tail that is usually, but not always, rigged on a lead jig head (more on rigging later). They can also be used as trailers behind other lures.

Grubs imitate a variety of food forms including minnows, shad, leeches, tadpoles, nymphs, and crayfish with their compact form and subtle, slow-swimming motion.

Tip: While grubs are made in giant sizes up to nearly a foot long for saltwater species, the majority of grubs fished for bass range from 2-5 inches. For panfish and trout, diminutive grubs in the 1-2 inch range can be deadly. For pickerel and walleyes, a 3-4 inch grub is usually ideal.

Why are Grubs so Effective at Catching Fish?

Grubs are compact packages, and that makes them especially effective on the hard-pressured fish found on many popular fishing lakes today. It also allows them to realistically imitate the most common food types bass feed on such as minnows, young shad, crayfish, nymphs and other small morsels. A grub will vie with live minnows for the best offering for crappies. 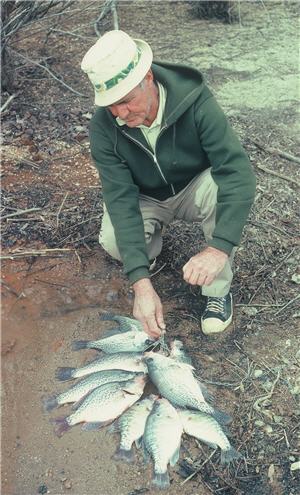 These are also slow-falling baits, which adds to their appeal. Strikes on the drop are commonplace.

Extra Tip: Grubs are incredibly versatile. Swim them back steadily and they imitate a healthy baitfish. Hop them over bottom rocks and they become crayfish replicas. Jerk them at mid-depths and they become a wounded shad. Grubs are also good as trailers.

Extra Tip: Since these lures are often fished slowly, those with scent added or salt flavoring are often particularly appealing to bass.

1. Rig a Grub With a Leadhead Jig

The most common way to rig grubs is the simplest—thread them on a lead jig head. Round ball heads are used most often, but darter, football and standup heads are also popular. If vegetation or snags are abundant, leadheads with weed guards are useful. 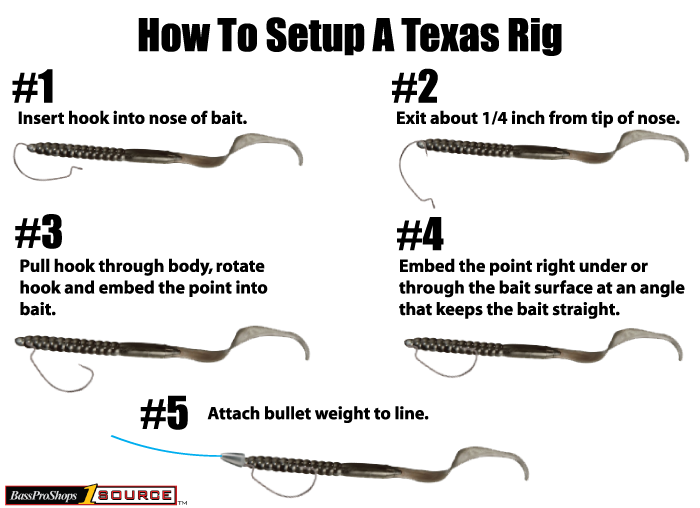 Grubs can also be rigged Texas style, with the hook embedded in the body for a weedless presentation. Position a bullet-type sinker ahead of the hook on the line, usually pegged so it stays tight to the lure. This method basically uses the grub as a mini plastic worm. Three-five inch grubs are best for this application.

Tip: How to Setup the Texas Rig (video)

A variation of the standard Texas rigging is to fish this rig with no weight other than the hook and grub. With spinning tackle and light line you can cast this to cover and it becomes a super soft topwater bait. It’s similar to a jerkbait, but is best fished with a quiet, slithering presentation instead of the typical darting action employed with those lures.

To rig a grub this way, use a barrel swivel, bead and egg-sinker weighing ¼-½ ounce, positioned 24-36 inches ahead of the lure. Rig the grub weedless with a small worm hook.

5. Fish a Grub Suspended off a Drop Shot Rig 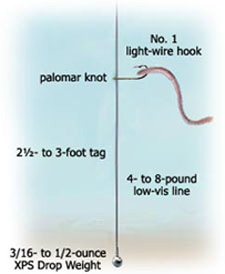 This system uses a weight of about 1/8-1/2 ounces on the bottom and the grub tied to the line 8-18 inches above it attached lightly through the head to a small hook such as the Gamakatsu Split Shot/Drop Shot Hook or Mustad Drop Shot Hook.

Try a variety of the fishing retrieves described below until you find the one that works best on a specific day on the water.

1. The Drop: Many strikes come on the “drop” with grubs. It takes close concentration to detect these strikes, which are often very subtle.

Tip: Watch the line carefully and allow just enough slack in it for a free-fall descent. At the slightest pause or twitch in the line, set the hook.

2. Simple Pull: One of the best ways to present grubs is to simply reel them back slowly and steadily across the bottom, preferably over cover. This imitates a smoothly swimming baitfish and is particularly useful for non-aggressive fish and cold water conditions.

3. Hopping: If a smooth delivery strikes out, try hopping the lure 12-14 inches. Then allow it to descend.

Tip: Most strikes with this presentation will come as the lure drops, between hops.

4. Ripping: This is a more violent version of the method above. Rip the lure 3-5 feet with a sweep of the rod. Then let it descend on “controlled slack.”

Tip: Don’t overdo this tactic. Save it for desperate situations when you can’t buy a strike with traditional retrieves.

5. Crankbait Style: This tactic involves fishing the grub in mid or upper water column levels. Reel it in almost like you would a crankbait, smooth and steady. But don’t worry about the lure dragging on the bottom.

6. Reel & Pause: A variation of the technique above is to reel part way back and then suddenly stop. The fishing lure will sink back down like a wounded shad running out of steam.

Tip: Be prepared for subtle strikes, mostly coming as the lure falls. If the fishing line twitches even slightly, set up hard!

Places to Catch Fish With Grubs

"Grubs imitate a variety of food forms including minnows, shad, leeches, tadpoles, nymphs, and crayfish with their compact form and subtle, slow-swimming motion. " Many anglers insist that by pretending to convince fish a lure is a prey food, that the lure will get struck for that primary reason. What they don't want to accept is the simple fact that lure action-by-design, size, shape and retrieve type are the only things to consider. The choices are infinite limited only by bias and superstition. I modify soft plastic lures and test them on many water. Many outings have taught me that specific lure actions catch fish regardless the species. Lure shape is important but only as it pertains to lure action and as an object-of-interest that holds a fish's attention long enough that provokes it into striking. Color is not nearly as important as some maintain and a few will do for most soft plastic designs. Clear plastic even has as much chance as any solid or translucent lure color as long as lure shape is adequate. When it comes to shape/action, there are many examples of tail designs that do better than curl tails or shad tais. The Crappie Magnet grub is an example of a split tail that comes to a taper. It catches ALL fish species.
To continue because editing tool is not available. The Magnet for example works because it allows different angler-imparted actions on a single retrieve that causes the lure to move different subtle ways. Fish are super sensitive to object actions and other visual stimuli and can't help themselves but to focus on those actions. A quiver here, a dart there, a glide or single hop off bottom are key to getting fish to strike maybe just out of being irritated by something that DOESN'T belong. Fish may or may not want to eat the object as much as to DESTROY it, but regardless of motives anglers pretend fish have for striking, the simple reason is in lure action-by-design. Many similar lures don't catch nearly as many fish and it's all because of lure action inherent and/or imparted. Recently I discovered how to make a mini-stick (shorter and thinner than a Senko.) I wacky rig it using a light jig head and it amazed me how many fish it caught first time I tested it. In fact it does something a Senko isn't capable of : fast vibrating legs and body on a steady retrieve. Fish chase and clobber it which is an example of a lure that has rounded tips that contribute to the lure's action and success. Don't get 'hooked' into believing fish must 'believe' a lure is an animal to eat, but rather a shape and action it can't avoid striking when irritable enough, similar to a human reflex that can't be controlled.

Gerald Almy has been a full-time outdoor writer for over 35 years, with articles published in over 200 publications. He has written hunting and fishing columns for many newspapers both in Virginia and Texas, as well as the Washington Post. He has written two books on fishing and contributed chapters to a number of hunting books. He has won many awards for his writing. In 2008, a feature he developed for Field & Stream and wrote for five years called “Best Days of the Rut,” was nominated for…
END_OF_DOCUMENT_TOKEN_TO_BE_REPLACED