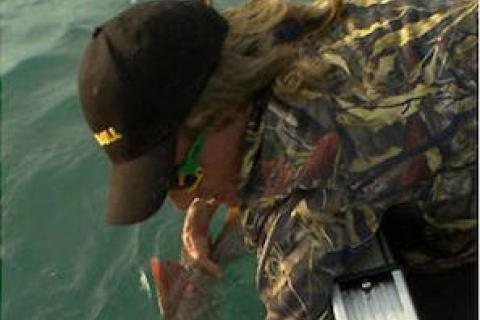 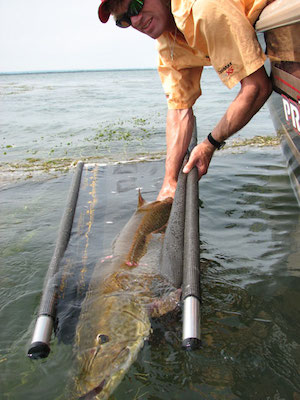 The basics can never be emphasized enough. In the act of fish-catching, it is not the bells, whistles, tricks, twists, scents or latest lures that really matter. Gadgets help. And, at times, fish readily bite gadgets. Most are legitimate tools, really … but the promises for success associated with them often blind anglers to what really catches fish consistently: knowledge of lake and its forage, boat control, ability to pattern and take full advantage of feeding windows … boring, “basic” stuff.

The basics save fish, too. Of course the release portion of the proposition, not being the glamorous part, unlike “catching,” doesn’t seem to result in as many “magic devices” being offered by manufacturers for release. Notice how again, we find the most important thing of all – in fishing (successful catch and release to assure healthy fisheries), like basics for “catching” – to be the least glamorous. Odd, isn’t it?

We see new people coming into the sport all the time – and we see people at various stages of experience – going out, and targeting muskie and/or pike specifically, without the proper tools necessary for successful release. (We also see supposed experts, like me, continuing to learn.) Unbaffled by newfangled gadgets here, let's go over again, the “must-haves” as far as tools for proper esox release. 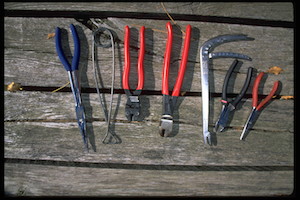 Esox anglers need long-nose pliers (the longer, the better) and quality hook cutters – that’s what is absolutely necessary – or you just shouldn’t go fishing. Two pair of each of these is heavily recommended (just in case), since crazy things can happen, and there are situations occasionally where two anglers can (and should) work on the fish at the same time. Jaw spreaders can help in many situations to hold jaws open (especially so with pike), and I also like a pair of super-sharp cutters handy, to quickly snip line in cases where fish are rolled and tangled. You should have pre-sharpened hooks ready for replacement on lures, and split-ring pliers are handy.

Nothing at all has really changed as far as recommendations (no new “better” gadgets to report) for tools. Knipex cutters are absolutely the best for cutting strength and longevity – and for the fish. 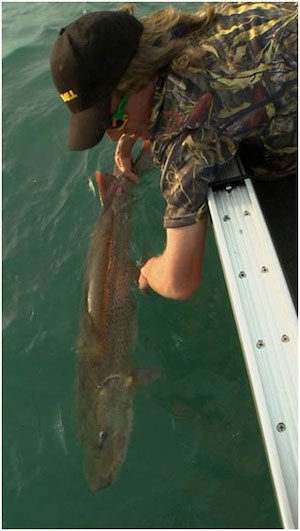 This is the topic that I really wanted to cover and I figured the spring period is a pretty timely one to be discussing it, “prior” to the heat of summer coming on.

If you’ve read my writings in the past, you know of my stressing the basics. One thing I’ve mentioned often, that has also been stated by fisheries personnel, is that the “stressors” to fish during release are cumulative.

In example, let's say a release went such as—that a fish was hooked deeply, requiring hook-cutting and was a little tangled in the net, had a minor tear in a gill arch from a hook while twisting, some slime wiped off from angler’s clothing during hold for a photo, was out of the water for about 45 seconds for that photo and then had to deal with flopping around in waves (wind and big water) while angler attempts revive over the side of the boat. It happens.

None of these factors, alone likely, will result in mortality. But they add up, and if one thing goes really wrong, or a bunch of “little” things go wrong, it can result in immediate or delayed mortality.

The one huge additive factor is time. Minimizing the time the fish is in possession is huge. The “time” of the fight is a big factor. We don’t want the fish totally exhausted before the release process starts (and that’s why lighter tackle, for sport, is not recommended). And there can be extra time getting hooks out (cutters are “quicker”), getting cameras ready, getting a hold, holding … time adds up (odd, but I seem to notice this more with age).

Heat, or water temperature, is the other basic, but very important factor I’ve mentioned often. Now, I’m thinking it deserves even more emphasis than I’ve given it. A couple things have happened in the past that have this on my mind: one being study results that I read, and the other simply being situations during hot summers I experienced a few years back, where surface temperatures were pushed into the 80s for extended periods in northern latitudes – which is rare, but it does happen.

The heat was talked about quite a bit, between muskie-folk. The reason it came up a lot is because people were having some bad experiences. Oh, it stays somewhat “hush-hush” as no one enjoys at all – or really wants to talk about having a questionable release or a definite loss of a fish. But that’s the reason it comes up when the water gets hot. Fish die … some barely swim away … and conscientious anglers wonder.

I become more convinced every year that the water temperature factor is huge! In the “example” I provided above, add to that scenario water surface temperatures 75 degrees or higher. Nothing absolutely certain, but “very” good odds that fish doesn’t survive. Take the same scenario with 60 degree or less in surface temperature and the fish very likely survives. Take the same scenario with 45-degree temperatures (no excuse to delay things), and, frankly, I’d be completely unconcerned for the fish even if there was over a minute out of water.

That’s my honest take these days. It’s based on my personal experiences (of which I’ve had lots) and that of others I speak with … and now, too, a study that’s quite enlightening.

Before study info though, I want to digress, recalling that the last time I really experienced fishing in heat a lot (I just flat try to avoid it now), which was the summer of 1995. I was still guiding in those days and was booked heavily. It was a miserable deal all the way around for me. There were several fairly long periods where the surface temperatures were in the low 80s. Of course, the fishing wasn’t great. Lots of time after dark, uncomfortable more often than not … few fish caught comparatively. But frankly, that was the good news.

Long story short, I kept guiding because I was booked and I wanted/needed the money. While I only know for certain that one fish died (after “long” revival, fish finally swam away … wind remained absent … as I drove by with new clients the next day – there it was, floating), I expect there were more. You could simply tell by the way the fish were reacting and “looking” in general at the end of a fight and release. Not good. For my clients, I was desperate to get some action … but then when we finally hooked one, I was secretly hoping it would wiggle-off at boat-side.

While obviously the best thing to do would have been to have quit fishing, I did find myself adopting a no-photo (unless in-water) policy with clients. I’d warn them prior, and if they agreed we’d go (to folks’ credit, I recall no one canceling a trip). I was very glad when that heat wave was over.

The study I’m speaking of, I read about in the In-Fisherman magazine (February ’05 issue). It was a walleye tournament mortality study done by a Brian Graeb and Dr. David Willis of South Dakota State University. The study was done in ’02 on a Lake Francis Case (Missouri River reservoir in South Dakota).

The important stuff is that they studied three different events and did things the same way each time. And, the only significantly differing factor: water temperature. Tourney-caught walleyes went through the rigors of fighting, transport and weigh-in. The control fish were collected by electro-fishing and held in the same conditions as the tourney fish (round, indoor pools fed by water from the reservoir) for 68 hours.

I don’t know about you, but to me, that is very eye opening. It confirms that release/handling/time stressors are additive, but even more obvious and important is that water temperatures are a huge factor to consider in regards to how much “handling” fish can handle. In cold water, anglers handle fish a certain way – and basically all of them survive. But, add 20-plus degrees to the surface temperatures – with the same handling – and now the majority of the fish the anglers catch die.

I won’t pontificate on all of the implications of this, but obviously it’s something to seriously consider for all anglers, guides, TV shows and for those who operate any release tournament events with formats extending handling/holding of fish.

For muskie and pike anglers, the lines are gray, but as water temperatures climb into the mid-70-degree range and beyond, if angling, I believe that a barbless hook policy with no lifting from the water to be the most responsible way to handle release under these conditions. Minimize any time and handling stressors. And, boy, if it gets in the 80s, it’s time to consider not fishing.

There have been many cases where it seems anglers will ignore “common sense” (I know I have, and I try not to these days) while waiting for some type of study or info to “prove” something. My plea here is that we re-accept the basic principles and values of common sense as they apply to fisheries (so we are not waiting around for study results before implementing something that it’s painfully obvious should very likely be done) – and life.

Note: If you have questions or comments on this or other articles of mine you may have read, contact me through the website www.thenextbite.com.

A Muskie Fishing Tip for Use With Spinnerbaits

From Top to Bottom Fishing for Winter Pike