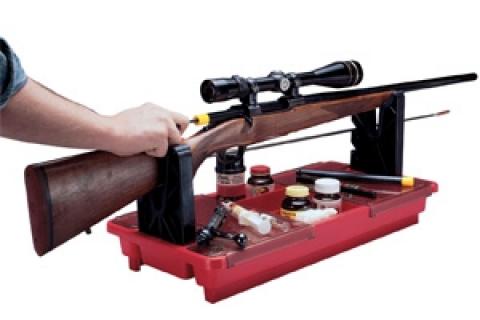 Now that the Polar Vortex has come through (that's the new term for winter), many of you will be storing away your guns for the winter. Sure, a lot of us will be varmint and cougar hunting, but I bet over 85 percent of the hunters are done for the year. Before you put away your guns, though, let's make sure that they're properly cleaned or they'll be rusted up when you pull them out next hunting season.

Here's why I'm writing about this. My little scalawaging nephew left the deer lease, threw his gun in a gun case in back of his truck and drove home for five hours in the pouring rain. He arrived home dead tired and threw the gun case in his closet and didn't touch it until the next deer season. Unfortunately his gun case was not waterproof.

When we pulled it out to sight it in, we discovered a rusted up pitted mess. Unbelievably, the rifling wasn't ruined. I thought that it was probably ruined, but I took and my gunsmithing buddy worked on it.

To do it right, we should have ground out all of the pits, but that would have been a major undertaking and cost more than the rifle was now worth. So we basically sand blasted the rust out of the pits and then applied a special coating and baked it in. Luckily we were able to save the gun.

To keep yourself from going through all of this, let's talk about how to properly store your guns for the winter. Think about it for a minute — the worst case scenarios hit when you're most tempted to not properly care for your guns. It's been raining/snowing all day. You're cold, wet and miserable and just want to eat a bowl of stew, take a hot bath and crawl into bed.

If you're an old-timer, you have to jump into the 21st Century. Fifty years ago we were taught to run a patch with a few drops of oil down the barrel, run an oiled rag over the outside and call it good. That's not enough.

Years ago when I got my first really accurate rifle, my ballistic expert buddy taught me to use Sweet's 7 to clean out the fouling. Somewhere around 10-15 years ago, Sweet's 7 fell from grace and a lot of people don't even use it anymore. (I mix it 50/50 with Hoppe's 9 to clean out my rifling.) In fact, it has fallen so far out of grace that I don't think that Bass Pro Shops even carries it any more so we'll skip that method and jump right into the second option which what most people do nowadays.

The first thing you'll want to do is to run a patch down the barrel with a heavy dose of Hoppe's 9 or one of your favorite solvents. Let it set for 10-15 minutes to allow it to work and then run a clean rag to remove the loose fouling. Do as many times as necessary then put a drop of solvent on a brass brush and run it down the barrel numerous times to break loose more fouling. Then clean it out with a rag. Repeat this process as many times as necessary until the rag comes out clean.

As kids we'd pile blankets on the kitchen table and lay our rifle on them to do our cleaning. Trust me on this one: To hold your gun stable, not drop it off the table and just to make it overall easier buy an MTM Case-Gard Portable Maintenance Center. I love them. They have Vs to hold your gun steady, plus the tower has slots to hold your cleaning rods. Then on bottom are two sliding treys to hold brushes and patches. I've even been out in the boonies prairie dog hunting and had buddies set them up on their tailgate to field clean their rifles when we're shooting 400 rounds/day.

Next you'll want to wipe the barrel and action with a patch that you applied a few drops of Hoppe's 9 on. After your gun is clean, don't touch the metal. Your fingers have salt/oils on them which will cause rusting.

The last step will be to clean the bolt and breach? Remove the bore guide and slip a rag into the chamber and clean it out. Then put a drop of oil on a clean rag and wipe down the bolt. The bolt gathers a lot of dust while hunting and you don't want that grinding into the action.

You should be good to go now. If you properly clean your guns they will last for many generations. If you don't, they won't even last for your lifetime. Take care of your guns. They're a valuable investment and not only that, there's something special about hunting with your dad or granddad's gun. I remember years ago seeing a picture in the local paper. A kid had just shot his first deer with the same old lever action Winchester 30-30 that not only his dad but also his granddad had shot their first deer with. How cool is that?

The Profession of Gunsmithing