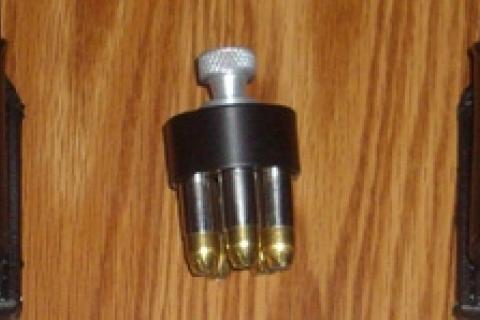 Also revolvers are way more dependable when you're in the backcountry falling in rivers and eating dust. In town I carry an automatic but in the mountains I carry a revolver. I remember once my wife and I flipped a canoe. I dumped the water out of the barrel, gathered our gear and off we went again — none the worse for the wear. That would have caused some problems with an auto. Also in extremely cold weather you won't have to worry about an action gumming up.

The downside of carrying a revolver though is that you're limited to six shots. And if you empty your gun on a bear you have to fumble around in your pockets to finds more shells to reload. In a panic situation this can take a minute. Most bears don't take a time out to allow you to reload.

Then years ago speedloaders were invented, which rectified this problem. They keep your shells handy and are 10 times faster to reload than if you have a handful of loose shells rattling around in your pocket.

If you're not familiar with speedloaders, they resemble the upper 1/3 of your cylinder. To load them you twist the knob on top, insert either 5 or 6 shells, according to what your gun holds, and then twist the knob the other way to lock the shells in.

To carry your speedloaders, they make small holsters in which you can place your speedloader. This way they are readily available and you have 18 rounds at your fingertips if you count the rounds in your pistol. You can carry as many speedloaders as you want but most people that I know carry two.

So let's say you're in the mountains and a pack of 10 bears attack you. Quickly you make 6 headshots. Open your pistol and dump out the spent shells. Grab a speedloader out of the holster and slip the load into your cylinder and turn the knob releasing the shells. Slam the cylinder shut and you're good to go for the last four. (Ok, that story may be a little dramatic).

Another scenario in which they're nice: Let's say a bear really does charge; in a panic you shoot off four shots and you get lucky and he drops. Now you're down to two shells. Dump the two good shells and four cases and slam in your speedloader and you're full charged again.

With a little practice you can become incredibly fast in reloading. I've seen videos of guys that seemly can reload about as fast as I can get another clip in my auto. In the days before automatics became so popular, speedloaders were a mainstay of police departments.

To order some, just select whatever make/model of pistol that you have. One speedloader does not fit all so you will have to get one that is made for the specific model of your pistol.