How Hunters Fund Conservation Through the Federal Duck Stamp Program 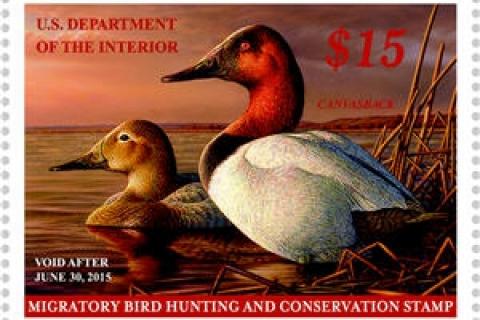 Many of the people who buy a federal Duck Stamp probably don’t realize how important this conservation program has been to the healthy duck and goose populations we now enjoy across the United States and Canada.

Now is a great time to reflect on this program’s value. The Duck Stamp is celebrating its 80th Birthday! On Aug. 22, 1934, the first duck stamp was sold. Since that time the sales of each year’s stamps have collectively generated over $800 million for conservation and helped preserve and protect over six million acres of wetland habitat.

“Duck stamps were one of the key funding mechanisms that brought many waterfowl species from vanishing to flourishing,” said Keith Balfourd, of the Boone and Crockett Club.

The Club’s members played a strong role in promoting and establishing the federal duck stamp, and its members also formed the American Wild Fowlers group, an organization that later became Ducks Unlimited.

Early in the 20th century, waterfowl were under heavy pressure from unregulated market hunting, water diversions, draining of wetlands and other habitat destruction. Seeing their plight, Boone and Crockett Club members went to work.

In 1904, Club member and Pennsylvania Congressman George Shiras began a long crusade to place migratory birds under federal jurisdiction. With help from the newly formed Ducks Unlimited offshoot, Boone and Crockett members pressed for the passage of the Migratory Bird Conservation Act of 1929. This important conservation milestone established the national wildlife refuge system, which today provides habitat for millions of waterfowl and other birds and animals.

Finally, in 1934, a major source of funding for waterfowl conservation became available with the Migratory Bird Hunting Stamp Act. This was pushed through Congress by a determined Connecticut Senator Frederic Walcott, also a Boone and Crockett Club member.

The first duck stamp was illustrated by yet another Boone and Crockett Club member,  Nobel Prize winning political cartoonist, Jay N. “Ding” Darling. The first stamp was sold on August 22 for $1. Amazingly, 635,000 stamps were purchased that first year.

Within five years, annual sales topped $1 million (equal to about $17 million in today’s dollars). The benefits to waterfowl have continued to grow ever since.

So next time you pull out your wallet to buy the federal duck stamp required for waterfowl hunting, do so with a smile and reflect on how important this program has been to conservation and wildlife in America. Few programs have matched its success.

This year’s Duck Stamp Art Contest was held on Sept. 19 and 20 in Shepherdstown, West Virginia, to pick the painting for the next stamp. Eligible species included the brant, Canada goose, northern shoveler, red breasted merganser and ruddy duck. The winner was Jennifer Miller of Olean, New York, for her acrylic painting of ruddy ducks

Gerald Almy has been a full-time outdoor writer for over 35 years, with articles published in over 200 publications. He has written hunting and fishing columns for many newspapers both in Virginia and Texas, as well as the Washington Post. He has written two books on fishing and contributed chapters to a number of hunting books. He has won many awards for his writing. In 2008, a feature he developed for Field & Stream and wrote for five years called “Best Days of the Rut,” was nominated for…
END_OF_DOCUMENT_TOKEN_TO_BE_REPLACED