Are You Neglecting to Hunt Micro Deer Hotspots? 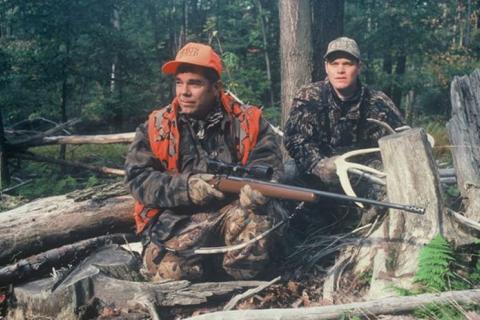 Most deer hunters favor big chunks of territory and deer stands that overlook large areas. But some of the biggest bucks get neglected by this tendency to always think larger tracts and more visibility is better. 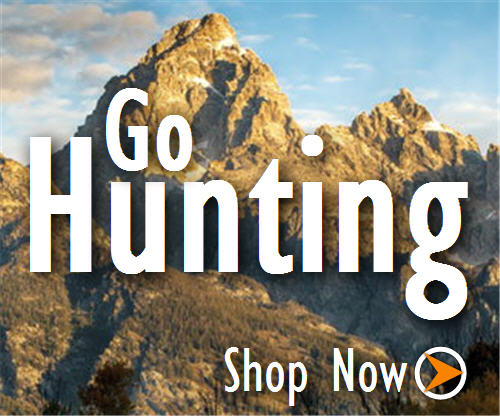 Given the chance, if you could choose a 1,000 acre hunting tract, a 500 acre one, or 50 acres, which one do you hunt? Many hunters would choose the largest, while a few might pick the 500-acre parcel. In fact, the smallest 50-acre parcel might hold the biggest buck of all. Why? Because it’s neglected and probably gets virtually no pressure.

Isolated clusters of brush, small clear cuts, patches of warm season grasses along a creek, public tracts with no easy parking…any place with sufficient food and cover that’s too small to draw attention has the potential to hold a mature buck. Once hunting seasons start, bucks are immediately drawn to these types of locations, which offer isolation, security, and a place to escape the human pressure.

These overlooked spots have everything a deer requires in a small confined area, with little need to move. And that’s a mature buck’s formula for survival: moving as little as possible.

Tip: Check out this list of top deer hunting micro hotspots along with a tactical tip for hunting each of them.

A mature buck will certainly use a larger area during much of the year. But this is the type of area any deer older than two years will head to not just late in the season, but as soon as hunting season arrives.

In fact, a recent Penn State radio telemetry study showed that deer change their behavior patterns and head to these types of isolated areas the day before the season opens as hunters invade the woods to set up stands, check out where they’ll hunt and do last minute scouting.

One of the most important things to keep in mind about these mini-hotspots is that they need to be treated like rare gems. Handle with care. They won’t take much pressure before they turn cold. That’s why you need to plan your strategy carefully before approaching them. You may only get one chance to tag the buck hanging out in a given micro-hotspot.

Try these strategies that have worked for me for hunting hidey-hole bucks.

Approach the deer like you would hunt ruffed grouse. Admittedly, you have to be a bit lucky to pull it off. The shooting can be quite challenging. But it will give you an adrenaline rush you’ll rarely match when you jump a 175-pound buck instead of a 2 pound grouse and nail him with a quick snap shot.

Walk at a moderate pace, into the wind or across wind. Keep your gun at port-arms, scanning the cover as you go. Don’t sneak. Simply proceed like you were taking a casual walk. This transmits a non-threatening aura to bucks, like you were a forester or hiker. 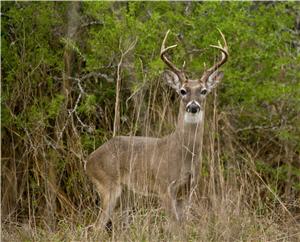 Sometimes you’ll get amazingly close before the quarry realizes its mistake and busts out. Occasionally you’ll even see him first, staring at you.

Take the shot instantly, as he rises up. This is your best chance. If you’ve practiced it, you can try a broadside running shot. But hold off if the buck is running straight away. There’s too much chance of wounding the deer and not making a lethal hit.

This tactic is especially valuable in areas where there’s lots of open cover between the micro hotspots. That was the case on a hunt I took in central South Dakota. On that hunt almost every pocket I checked during two days yielded either a group of does or a lone buck. Among them were a pair of heavyweight eight and 11 pointers that I took home, filling my two-buck limit.

Catch the Buck Coming or Going 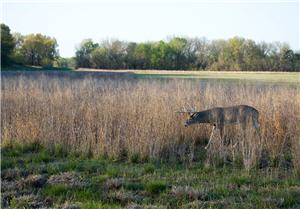 While micro hotspots can hold big bucks all day, in some cases they do travel out of their secret spot to find different foods, freshen up a scrape line or check for does in heat.

Scout the edges of the location to find the heaviest-used entrance point. This will often be where there’s a strip of brush, overgrown fence row, ditch or brushy hollow that leads to it, offering cover as the animal enters and leaves the sanctuary.

When you find fresh, large tracks leading to it, backtrack 75-150 yards. Set up there on the downwind side of the trail you’ve located in the strip of cover or terrain feature leading to the hotspot.

Tony Fulton used a tactic similar to this when he harvested a massive 295 6/8-inch buck in Mississippi. He shot it as it stepped out of a micro hotspot he had actually created: a small pine thicket he’d planted and allowed to become overgrown with weeds and briars. At that time, his buck was the highest scoring non-typical whitetail every killed by a hunter. 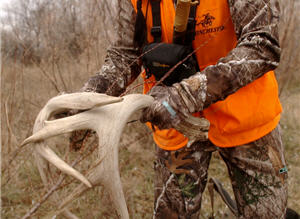 If the weather is hot, an older buck may not leave his secret spot until dark and return before daylight. In that situation you need to be aggressive: rattle him out.

Bring a friend and set up near the downwind edge of the thicket. Position the shooter in some cover, but where he can still see an approaching deer. Place the rattler 25-75 yards behind him.

Gently tick a pair of antlers together for one or two minutes. Wait ten minutes, clack them louder. Wait ten more minutes, and then rattle all out. If a big buck is home, he might ignore the soft antler ticking. But he’ll likely come barging out to chase out the interlopers in his territory when you clash the antlers together more forcefully. Be ready for him.

Are you and expert at rattling whitetails? Take this quiz and find out.

Push the Buck Out of his Hotspot

Many micro hotspots are perfect for drives. Since they’re so small, though, bucks are hyper-sensitive to pressure and may bust out before the driver even gets close to the cover. It’s crucial to have standers completely in position before the pushers make their move.

Place one blocker overlooking the likeliest downwind escape point and another at the nearest next patch of thick cover the buck is likely to flee to. A third hunter can watch a possible side seam exit or simply wait where the drivers enter, in case the buck circles.

Now send the drivers in, wind at their backs. Walk slowly, with no shouting or noise. Someone will likely get a shot, but know your safe shooting zones before beginning the drive.

In central Montana along the Musselshell River a friend and I used this approach to kick out a heavy-bodied eight pointer and push him right into my lap for a chip shot. That deer was settled on a tiny isolated island in mid-river.

To help you focus in on these top overlooked deer hotspots, here is a rundown on several that you might find in your hunting area, along with a tactical tip for hunting each of them.

Cluster of high weeds in an open field where it’s too rocky or rough for a farmer to mow or plow.

Tip: You’ll be approaching across the exposed field, so have a couple of friends watch likely exit routes in case he busts out before you get there.
Small grove of conifers overgrown with briars and weeds.

ip: These spots are especially good on brutally hot days when bucks love to bed in the cool shade of the pines. On the opposite extreme, they’re great in cold or snowy weather when they stay warmer than surrounding areas and offer shelter from the wind.

Tip: Find ones that have grown back three to five years and the food and cover will be at just the right stage for jump shooting.

Chunk of brush, forbs and weeds along a farmer’s driveway or behind his barn. Not many hunters believe a buck would hold there? They do.

Tip: Wait until pressure starts to build in surrounding areas and then turn to these unlikely spots.
Small marsh or mini swamp.

Tip: Find a dry elevated area or hummock in the swamp and wear waders to get in while the buck’s out prowling. When he returns, be there waiting for him.

Abandoned home site. Deer gravitate to these like bass hold near structure.

Tip: Find one with old fruit trees, clover, or privet hedges that used to grow in the yard and take a spot downwind of those deer treats. On hot days you might even find bucks bedded inside the dilapidated buildings.

Tornado-ravaged area with lots of blow-downs and twisted tree limbs. These spots are ugly, but they can be great hidey-hole spots for a big buck.

Tip: It’s tough to walk through these tangled areas, so hang a stand near the downwind edge and catch him along his entrance route at dawn or dusk.

Tip: There’s usually no pull-off near these tiny tracts, so have a friend drop you off. That also avoids drawing attention to the tiny hotspot. But bring your cell phone—you might tag out early and need help hauling your trophy out.

Gerald Almy has been a full-time outdoor writer for over 35 years, with articles published in over 200 publications. He has written hunting and fishing columns for many newspapers both in Virginia and Texas, as well as the Washington Post. He has written two books on fishing and contributed chapters to a number of hunting books. He has won many awards for his writing. In 2008, a feature he developed for Field & Stream and wrote for five years called “Best Days of the Rut,” was nominated for…
END_OF_DOCUMENT_TOKEN_TO_BE_REPLACED