October Lull? In Fact, Buck Activity Will Increase This Month 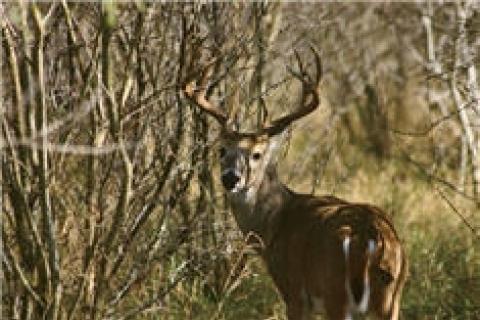 The Symptom: For the first week or two of archery season, the guys at camp were seeing bucks at evening food sources with shooting light to spare. Everybody reported good activity. But since about the first of October, those early-to-rise bucks have been scarce, and the hunters are now complaining.

The Diagnosis: A real or perceived slowdown in deer activity commonly referred to as the “October lull.”

Hunters often say they see fewer deer during the first few weeks of October. The biological basis for this, however, is relatively unknown. Bucks may actually be moving less, at least during daylight hours. Or they may only seem to be moving less because they are no longer showing up in the expected spots.

To determine if this slow period is real or perceived, I went to a specialist, Dr. Mark Conner at Chesapeake Farms in Maryland. Using GPS radio collars, he and graduate student

James Tomberlin have been accurately recording the locations of mature bucks as often as 30 times per day.

Although still analyzing data, Conner tells me it’s clear that buck movement increases consistently from late summer through the rut. Specifically, bucks moved a total distance of about 11?2 miles in a 24-hour period during late summer, almost 2 miles per day by early October, and 21?2 by the rut. In other words, buck movement in reality picks up during the so-called October lull.

Moreover, Conner’s data shows that the timing of buck movement stays the same; the deer do not suddenly go nocturnal. The perceived lull, then, must be related to changes in where bucks are moving. And it’s probably no coincidence that it happens in early October—just when a whitetail’s use of agricultural crops declines as acorns, persimmons, and other fall mast becomes available back in the woods.

The Prescription: Be adaptive. Clearly, too many hunters peg deer using open ag fields early in the season and are at a loss when deer shift menu items. You need to change tactics.

Get out now and locate the hard and soft mast sources on your hunting property. Scan the ground and use binoculars to peer into the branches of mast trees to determine which are producing and will continue to bear the best crop. Identify nearby funnels and look for old rubs to reveal traditional routes to these hidden foods. Fresh feeding sign, large tracks, and reopened rubs can tell you exactly where bucks are. Set up overlooking the trail, rub line, or funnel leading to the grub. With buck activity rising now, these travel corridors are the top spots to score—while everyone else is complaining.

The Doctor’s In: Karl V. Miller, professor of wildlife ecology and management at the University of Georgia's D.B. Warnell School of Forestry and Natural Resources, is one of the country's foremost whitetail experts.

Don't Wait For November To Kill a Rutting Buck

Founded in 1895, the magazine strives to capture the excitement of the outdoors, to be a reliable source of how-to information, and to promote conservation and sporting ethics.

Field & Stream readers define themselves as hunters and fishermen. Their passion for these pursuits…