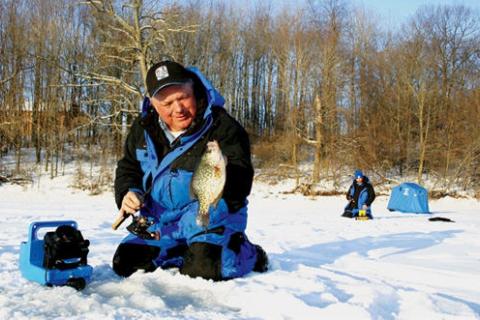 Crappie are a great species to fish through the ice. At times they can be challenging to find, but once you locate a school of slabs, it's worth the effort. Often eager to investigate lures, crappie can be wary to hit baits, and even when they do hit, takes can be extremely subtle. Here are some suggestions to help you trigger crappie bites this ice season.

I''ve lost count of the number of times I've watched on my Vexilar as crappie hastily close in on a bait, only to stop within a few inches and not hit. This can be discouraging; however, drawing them in is the first step in getting crappie to bite. Attracting crappie means your presentation has appealed to their curiosity. Now all you've got to do is get them to commit and hit the bait.

A portable flasher unit such as the Humminbird ICE-45 become extremely helpful when attempting to determine how crappie react to you're presentation. Flashers give you instant feedback on what's working and what isn't.

Once crappie are close, getting them to hit is a matter of trying different presentations until one works. For the most part, larger movements, like one-foot jigging lifts, will attract crappie, while pauses between jigging movements and the occasional jiggle will trigger hits. Slowly swimming or hopping the bait upwards and away from a marked fish is another tactic to force crappie to either hit the bait or watch a meal disappear. If unable to trigger a fish with the methods above, I've had success with the following.

Assuming you've marked a fish on a flasher that won't hit, raise the bait to the surface and then let it free-fall. Monitoring the lure's depth on the flasher, stop the bait a foot or so above the fish and don't move it. Often they hit it as soon as it stops and sometimes will swim up to hit the bait on its long descent. For negative-mood fish, adapt the above by slowly swimming the bait down on a controlled drop instead of an open bail free-fall. Jiggling the bait after the fall-and-pause approach might trigger hits.

Another important factor to consider is that crappie will suspend and will sometimes be right under the ice. If you haven't marked fish on a Vexilar, take the time to slowly swim a bait down to the bottom, taking time to work the entire water column. If you always drop baits to the bottom, you'll pass over a lot of fish. It may seem time consuming, but you'll be convinced this approach is worth it once you hook a few suspended fish. 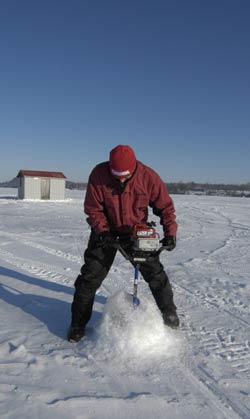 Your ice fishing lure selection can be critical to triggering hits. One outing last season, I tried three different types of crappie jigs before I could convince a school of crappie to bite. But the action was hot once I discovered the right bait. It would have been a miserable outing if I hadn't changed jigs and experimented with my presentation. In this case, paying attention to details resulted in a great catch.

If using horizontal jigs, make sure the knot is centered so when the bait's stationary it rests straight and not on an angle. Just as important is tying a swivel a few  feet up the line to prevent line twist so lures won't spin when at rest. Keeping hooks ultra sharp is also important to hooking fish. If you prefer to not use a swivel, then regularly remove line twist to ensure the underwater presentation remains as natural looking as possible. Lastly, it's best to tip lures with some form of bait, whether it be real live bait or artificial products. Also, be sure to rebait jigs often; scent is a big factor in getting neutral or negative mood fish to hit.

To maximize your fishing success, concentrate on targeting crappie during peak seasonal and daily periods. First and last ice can produce fantastic fishing with crappie aggressively hitting lures after a reprieve from fishing pressure for a few weeks as the water froze. Once mid winter sets in, fishing can become more difficult. To put the odds in your favor, hit crappie areas at dawn and dusk.

I can recall several outings where late afternoon produced few fish, but once the setting sun hit the tree tops on the horizon the fish turned on. When night fishing for crappie, make sure you set up well in advance so as to not spook fish right at prime time. Also make sure you bring headlamps and lanterns so you can safely find your way around and off the ice when leaving.

I love fishing in my portable ice shelter . It blocks wind, letting me watch the line for crappie's subtle hits and concentrate on presenting baits. Of course on mild days, it's fun to hop from hole to hole in bays looking for active fish. In both cases using a spring bobber can help you spot light hits. A lot of the time Crappie will swim up and take the bait. This causes the downward bend in the spring bobber to straighten. When this happens, set the hook right away as these fish can spit out a bait in less than a second.

Low-stretch, light fishing line from two- to four-pound test is recommended. Light line won't spook fish and stays straight when fishing micro baits. Too heavy a line won't fully uncoil if using light lures. A light to ultra-light, graphite ice fishing rod with a fast tip to signal hits is a good choice. Make sure you pick one with enough backbone to muscle a crappie through the hole.

To be an effective at ice fishing for crappie, you need the right ice fishing tools and need to be willing to experiment with baits and presentations. Paying attention to small details, how you present lures, and fishing during peak seasonal periods and daily times is critical to getting crappie to hit. It might take a few attempts, but once you figure out what they want, crappie fishing can be fantastic.

Finding Upper Midwest Crappie From Ice Out to Spawn