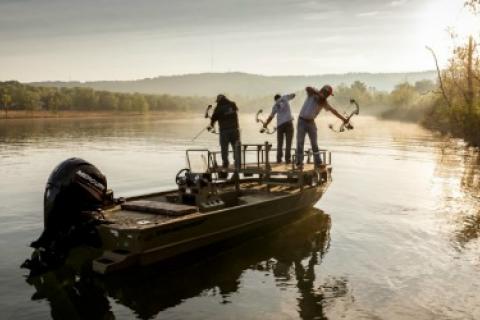 Those that bowfish—or are at least any good at it—are familiar with the concept of refraction.

Light waves traveling through water move at a different speed than through air.  This speed change physically bends the waves and causes underwater objects to appear shallower than they actually are. It’s interesting that changing speed has a way of skewing our perspective, especially when we have a tendency to believe what we see on the surface.

We can assume the act of shooting fish with a bow has been around since anyone had archery equipment, a body of water, and an empty stomach.  However, recent interest in bowfishing seems to have exploded to unprecedented levels.  Men, women, and children are all jumping on board—both recreationally and at the tournament level. Local and nationwide tourneys, such as the U.S. Open Bowfishing Championship, are popping up all around the country.  Retailers and manufacturers are catering to this growing market with specialized gear, clothing, and boats.

A sport expanding at this rate is going to experience its fair share of growing pains. The bright lights and loud airboats used in some night tournaments had lake-side neighbors calling to report alien invasions.  Social media posts featuring bloody coolers full of rough fish are admittedly less than appealing to those unfamiliar with bowfishing. Anglers who traditionally target these species—namely carp—are now up in arms trying to protect their favorite quarry.

Remember, however, things aren’t always as they appear on the surface. Those passionate about bowfishing’s continued growth realize changes must be made.  They’ve silenced most airboats and placed some residential areas off-limits—allowing homeowners to get a good night’s sleep. The catch of the day isn’t left on the bank to rot. Rough fish are donated and turned into organic fertilizer for nearby farmers. Specialized preparation tactics and recipes even have some discovering that these fish can be delicious table fare.

The impact of common and Asian carp on North America’s waterways has been well documented. Their behaviors uproot aquatic growth and suspend bottom sediments. The carp’s rapid increase in size and lack of natural predators results in a low mortality rate for adult fish.  A study from the University of Minnesota concluded that their removal is an effective tactic for restoring aquatic plants and water clarity in stratified lakes.  This results in more food for waterfowl and conditions that allow gamefish to hide, feed, and spawn.

While these facts have been proven, it does little to console anglers who target these fish exclusively by traditional means. Much like flopping largemouth in a fish basket, a cooler full of carp could mean fewer catch-and-release bites next season. The outcry from these anglers has been loud—almost loud enough to overshadow complaints from the anti-hunting and anti-fishing community.

Complaints and protests are positive actions.  They indicate beliefs and passions that are regarded important enough to require taking a stand. However, protestors should be careful to not allow these passions to blind them from the facts and the bigger picture.

Traditional carp anglers and those that bowfish are not on opposing sides. Both believe strongly in outdoor pursuits and conservation practices that will allow them to enjoy time on the water. They understand that an increase in people spending time outdoors results in more money for conservation—which keeps honey holes from being turned into water rides and strip malls.

Bowfishing brings in big money for state conservation efforts and local economies. The fast-paced action brings in new converts who may have otherwise opted for a La-Z-Boy® over a Jon Boat. Just like traditional anglers, they purchase licenses, pay launch fees at the ramp, and fork over excise taxes on gear and fuel that fund fisheries management.  Tournaments can also attract nationwide attention that results in a huge boon for local lodging, restaurants, and convenience stores.

Incremental funds make a massive difference, but true conservationists understand that future generations must be actively engaged or some outdoor activities may be lost forever. If left to the bobber and worm, angling pursuits would likely not last the next 20 years.

Encourage open conversations about new ideas and exciting tactics that could hook future sportsmen and women for a lifetime.  Voice concerns as they arise, but do not stoop to the level of the anti-crowd.  They already have enough ill-informed soldiers.

Before you fire away take a second look.  Things may not be exactly as they seem.

Rough Fish, It's What's For Dinner