Fish Finders for Your Kayak, Canoe, or Jon Boat 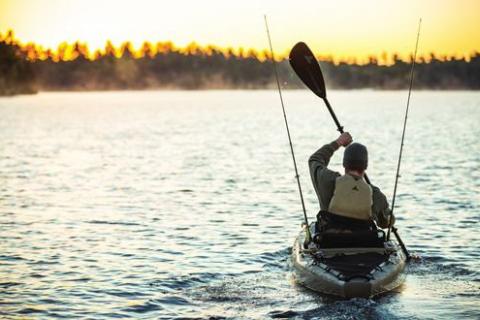 Finding fish in extreme shallows is made a lot easier with a kayak, canoe or jon boat that can almost float in fresh dew, but what about those months when the fish are deep offshore? To be versatile year 'round, your paddle-craft or other flyweight boat needs some electronics to search out the depths.

The obvious problem is electrical power--most sonar/GPS units run on 12-volt power. No big, heavy 12-volt battery, no power. And who wants to lug along a battery that weighs almost as much as their boat?

TIP: How to get your kayak fishing ready 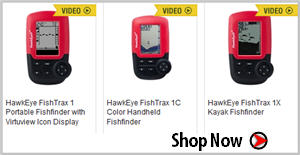 The Humminbird Helix 5 Sonar PT Fishfinder is perhaps the largest portable fish finder on the market, with a 5-inch color screen in horizontal format making it easy to track terrain as well as fish and bait movements. It comes in a soft-sided case and includes a dual-beam transducer that allows both extremely sharp images and wider area views at the user's choice. A charger and a transducer with suction mount are included.

The Humminbird PiranhaMax 4 PT Portable Fishfinder is a smaller, 4.3-inch screen model that does not include a battery. but it operates on a small portable 12-volt like the XPS Power Series Rechargeable Sealed Lead Acid Marine Battery. The 4 PT includes a convenient tilt-mount base, 320' Down Imaging® and mount and comes in a carry-bag.

The Garmin Striker 4 Portable Fish Finder/GPS also comes in a carrying bag that includes a rechargeable battery and a portable mount for the CHIRP transducer, either for any flat section of the vessel or for a trolling motor lower unit. The GPS system provides precise speed over the water as well as all the other usual waypoint selection info.

Lowrance takes a slightly different approach to portability, offering the Lowrance Universal Portable Battery Pack, a rechargeable but lightweight power system that can power most of the company's 4 and 5 inch sonar/GPS units. It comes in a travel bag that includes a mount for the sonar plus tackle storage, and also has a suction-cup type transducer mount.

Raymarine has an interesting take on small boat sonar with their Wi-Fish Wi-Fi CHIRP DownVision Sonar, which is basically a "black box" plus transducer that links to cell phones and tablets--there's no separate monitor or screen. Of course, you'll want a waterproof housing for your device if you use it this way, but since all of us are so familiar with operating this technology today, the company says the learning curve is minimal.

You may also need some sort of a transducer bracket to fit anything other than a jonboat transom, since flat spots on most canoes and kayaks are hard to find. The Scotty Kayak/SUP transducer arm mount and Sully transducer bracket, among others, make aftermarket mounts that can be fitted to most 'yaks and canoes.

Whichever sonar you choose and however you mount it, having underwater "eyes" on board will greatly increase your odds of angling success for anything from bass to catfish to crappies to walleyes on lakes across the country.

Catch Inshore Fish With One of These Inshore Fly Rods

Car Topping Your Kayak? Tips for Choosing the Right Equipment

How to Get Your Boat Up on Plane Quicker

How to Choose the Right Trolling Motor for Your Boat

How to Get Your Boat Up on Plane Quicker

3 Awesome Battery Chargers for Your Boat

Frank Sargeant is long-time outdoors editor of The Tampa Tribune and a senior writer for Florida Sportsman Magazine as well as for B.A.S.S. Publications. He's editor of The Fishing Wire and a regular contributor to BoatTest.com. He's also former senior script writer for BPS Outdoor World Television and former regional editor for Outdoor Life. His work has won over 60 national awards, including the ASA Homer Circle Fishing Writer of the Year Award in 2011 and the National Marine Manufacturers…