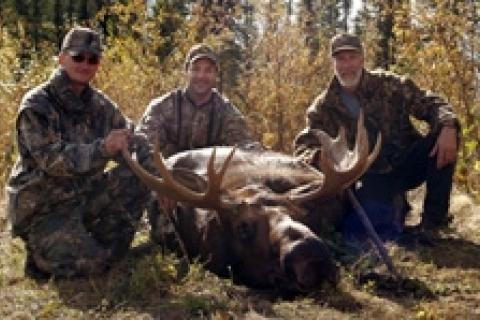 Since going to Alaska can be expensive, I suggest hunters plan on at least a 10-day trip. It doesn't always take ten days to fill a tag, but Alaska is remote, and the expenses associated with getting there so high, spending less than ten days in Alaska really just isn't worth it. When you consider that it can take two days on each end of the trip just to get to and from the your hunting location, it's easy to understand the rational behind the ten day time frame. Plus, the more time you have, the better your chances of tagging a trophy.

My trip started as an 11-day moose hunt in the interior of Alaska. Days before my hunt began, my close friend Dave Battle, a resident of Alaska and my moose-hunting guide for the trip, discovered we had read the regulations wrong. As a non-resident, my season was to end on the Sept. 15 instead of the Sept. 20 closing date enjoyed by Alaskan residents. Although we were both disappointed with this last minute curveball, Dave was convinced we could still score. So, off we ventured into the Alaskan bush.

Hunting moose can be like calling in an overgrown gobbler. From Day 1 of our hunt, the goal was to call a bull within bow range using bull grunts and cow moans. Since moose are never in a hurry to get anywhere, it sometimes takes two or three days for bulls that hear calling to actually wander into the hunting area.

On the first day, all was quiet on the hunting front. We spent countless hours calling and raking brush but never saw a bull. We heard one bull grunting in the distance, which kept our spirits up. Day 2 was similar to Day 1; we had bulls answering our calls, but we never caught a glimpse of a bull. One the evening of the Day 3, we saw a couple bulls fighting. The clashing of antlers could be heard far in the distance. Although neither bull presented a shot with a bow, seeing two bulls fighting in the Alaskan Wilderness made my heart skip a beat. After that experience, it was easy to see why so many hunters are willing to spend loads of money to hunt in Alaska.

On Day 4 of the hunt, just as Dave had predicted, moose began moving into our hunting area. One cow began moaning for what seemed like hours on a nearby lake. We nicknamed her "Mona" and had high hopes that her seductive calls would bring in a large bull.

I am a diehard bowhunter, but on the evening of Day 4, using a gun to harvest a moose started to sound pretty good. Realizing I only had a couple more days to hunt -- coupled with the fact that the rut was not yet in full swing – caused me to play a game of tug-of-war with myself. One minute I vowed to go home empty-handed rather than shoot a moose with a gun. The next minute the thought of taking a bull with a gun sounded like a fine idea. The decision became clear, though, when Dave received word that his Mom had been hospitalized and was going to need emergency heart surgery. We decided we'd have to leave the next morning so that Dave could keep in touch with his family.

Mona must have known the predicament we were in as my 11-day hunt suddenly turned into a four-day hunt. In the bottom of the ninth inning, with only minutes of daylight left, Mona began running across a lake with a bull close behind. I've never liked girls who play hard to get, and obviously neither did this bull. He chased Mona half way across the lake. Minutes later, the bull was distracted by Dave's bull grunts.

When the bull first heard our calling, he began to wander our way. He became very interested in us when we started to thrash the brush with my trusty walking stick. The bull came within about 120 yards, and then decided he wasn't interested in coming any closer. At that point I did something I've never done before: I set my bow on the ground, picked up Dave's rifle and decided to take the bull with a gun.

To get a good, clean shot at the bull, Dave and I snuck through the tall grass to the shore of the lake like a couple of cats sneaking up on a backyard bunny. I sat down on the bank of the lake and steadied the rifle and squeezed the trigger. That night was a night of firsts for me. I tagged my first Alaskan bull moose. It was also the first animal I'd taken with a rifle. I'll admit that after I took the shot I was a little disappointed that I didn't get the bull with a bow, but the disappointment quickly faded as I walked up on the monstrous animal.

I've hunted across the country for a variety of game animals, and this Alaskan Moose ranks up there as one of my favorite hunts. Things didn't start off the way we had hoped, though. The bulls weren't rutting very well. My hunt was shortened by several days. I ended up taking my bull with a gun. But now, weeks after the hunt, I look back on the hunt with nothing but fond memories. It wasn't the textbook bow hunt we had planned, but we rolled with the punches, and in the end, we took a bull.

Hunting in Alaska is truly a wonderful experience and one that all serious hunters should try. It can be expensive, but if you do a little research and hunt on your own, you can reduce the cost of the hunt significantly.

If you are going to go on an unguided moose hunt, you'll need to know how to call. A moose isn't as tough to call as an elk, but knowing when to say what greatly increases your chances of bagging a bull.

On this hunt, we used a variety of moose calls ranging from our own voices to moose calls. Using the electronic caller made calling simple. When used in conjunction with a moose decoy, you have a deadly pair. Using your voice and calling with a large tube can be very effective, too, especially when you break branches and rake trees like we did on this hunt.

In addition to learning how to call, you will want to research where to hunt in Alaska as there are a number of different units from which to choose. Some of those units have antler restrictions, and dates can vary from one unit to the next. You can be flown into a remote hunting spot, float a river or hunt off the road system. The most popular method is to be dropped off by bush plane. To determine where you would like to hunt, your best bet is to call a biologist in Alaska. They can provide valuable advice that can help you decide when and where to hunt.

If you are on a tight budget, the best thing to do is fly into the bush with a few friends. This allows you to split the cost of the bush plane, which is often the most expensive part of going on an unguided Alaskan Moose hunt.

The flight to Alaska from the Lower 48 can be very costly. If you plan a trip a few years in advance, get a credit card that offers frequent flier miles with each purchase you make. Miles add up quickly and can save you a lot of money. In my case, I saved over a thousand dollars by using my frequent flier miles.

When hunting with buddies in Alaska, make sure everyone understands how physically demanding a wilderness hunt can be. Being mentally tough is a must. Your anticipated hunt won't be enjoyable if your hunting buddies are out of shape or don't have the mental toughness that it takes to hunt ten or more days in the wilderness. Dave and I greatly enjoy wilderness hunting and the Alaskan Wilderness, which made it an enjoyable trip.

When going on any unguided hunt, having basic woodsman skills and knowledge is a must. The Alaskan wilderness is extremely remote, and weather conditions can change in a heartbeat. I know a few hunters who have been stranded in the bush for extra time due to bad weather. Possessing basic survival skills and knowing how to build a fire can come in handy. Also, bring extra food in case you get stranded. While in the bush, I ate a few bitter berries. I could survive on them for a day or two if I had to, but I would much prefer a pile of Oreo cookies and a hot meal.

An unguided moose hunt in Alaska can cost several thousands of dollars. That is a lot of money, but its peanuts compared to the $10,000 or more you would spend on a guided hunt.

Tagged under
How To Guide
Moose
Read 5,004 times

Chasing Antelope With a CVA Accura

How To Layer – Apparel Buyer's Guide

Tracy Breen is a full-time outdoor writer who writes for dozens of publications across the United States. He has articles published in Outdoor Life, Buckmasters, Bowhunting World, Petersen’s Bowhunting, Bowhunter and basspro.com. Tracy has cerebral palsy and often writes and speaks about overcoming physical challenges to enjoy the outdoors. Learn more about Tracy and his hunting adventures at www.tracybreen.com.