How to Build a Ground Blind for Bear Hunting 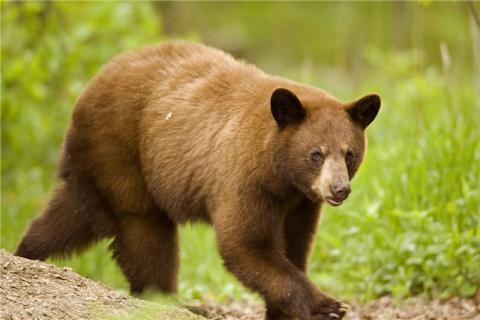 As a kid I was raised hunting in treestands. As time progressed they invented tri-pods and elevated hunting box blinds. And now they have pop-up hunting blinds that are portable. Last week I got a Browning Phantom pop-up blind and took it bear hunting. It's sweet.

Out west though not as many people hunt out of a blind as they do down South. There are a couple of reasons for this:

So permanent blinds are great if you're in an area that has a high concentration of game. As a kid I bet some of the areas in Texas that I hunted had a deer every two acres, but in Idaho you may cover a thousand acres before you jump a deer so it wouldn't be smart to just pick a spot and set.

But still, there are times out West where blinds are a must. Such as:

One of these days I want to talk about pop-up blinds but for today let's talk about constructing a ground blind out of local materials. I bear hunt a lot out of these.

They're simple to construct. Just find a big rock or a tree to use as a base. Lay two logs off each side of the tree about 2 1/2-foot high, angling down to the ground on the other end. This will be your rest when shooting. Lay smaller logs below it to fill in the gaps.

To further fill the gaps use large pieces of bark and sticks. Grab a clump of long grass and cut it off at the base and stick it in between the logs. Cut brush and weave them in the logs. Lay the logs in a "V" shape and you'll be concealed on 66 percent of the sides.

Then go downhill 50 yards and look up. Your blind will look like part of the natural surroundings. It will blend in with the scenery since it is made out of local debris. It didn't cost a penny, you don't have to pack it out and it took less than 30 minutes to construct.

Sometimes I'll even pack in a fold-up chair to my ground blind. If I'm on public land I may lay an orange pack behind me so if some gunsel sneaks up, he doesn't blast me.

Used to when deer hunting in Nebraska I'd carry a 5-gallon bucket and a tree saw. If I found a likely spot I'd set up a blind. There's always a few limbs that need whacked off. That's where the tree saw came in. Then you could use the cut limbs to help construct your blind. I'd then use the bucket to set on. If you get bored easily, carry a book or some magazines.

I've built ground blinds at water holes for antelope, for hunting deer trails and at my bait stations for bears. You may want to build two at your bait stations. That way if the wind is in the wrong direction just set in blind No. 2. It doesn't cost anymore to build two than it does one.