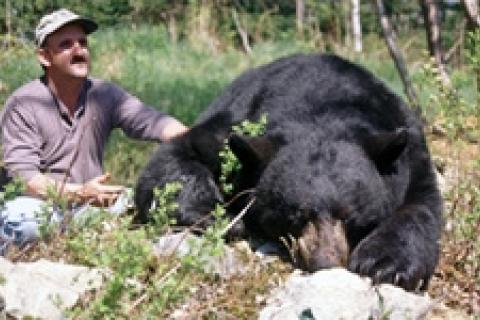 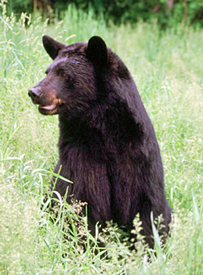 American black bears live only in North America. These familiar bruins are primarily woodland animals, occupying forests as far north as forests grow in Alaska and Canada and as far south as Florida and northern Mexico.

These black bears are managed as prized game animals. States with the largest populations include Alaska, Washington, Wisconsin, California and Maine leading the list.

You can improve your chances of bagging a bruin by following some basic guidelines. If you're new at this game, you should first study several good books on bear hunting, research the sport on the Internet and/or pick the brain of a veteran hunter. The more tricks you have up your sleeve, the better your chances for success. Space limitations allow only a cursory explanation of basic bear-hunting techniques here.

You'll also need to do some research to pinpoint good hunting areas. Harvest statistics available from state wildlife agencies can help you find public hunting areas or counties with healthy bear populations. Then it's a matter of homing in on good bear habitat and looking for sign.

Bears living in mountainous regions like to move around near bluffs. Wooded stream bottoms also are attractive, as are clearcuts. Studies of bear stomach contents show their most important autumn food is acorns, hence a large number of sightings in oak/hickory woodlands and mixed stands of hardwoods and pines. The next most significant foods are pokeberries and leaves, which grow in forest openings. Other significant bear foods include hickory nuts, persimmons, insects and carrion.

Spend as much time as possible scouting for signs of bear activity in the area you intend to hunt. Look for some of the food sources mentioned above, take note of their location and check them daily to see if they've been visited. Watch for bear tracks around watering holes. Large, soft black droppings full of seeds and acorn shells also are an indicative sign. Droppings often are found on logs, along with hair left when bears sun themselves. A bear meandering along a stony outcrop often leaves a trail of overturned rocks where it searched for insects. Bears sometimes scar tree trunks with their teeth and claws, another sign that can help bear hunters locate a promising area.

When hunting, remember that bears have keen senses of hearing and smell, and are highly attuned to anything out of place in their environment. Always hunt downwind from the area where you expect a bear will show itself. And to prevent a bear from winding you, try one of the products deer hunters use to mask or eliminate human odor. Some hunters actually use the bear's sense of hearing to their advantage by using predator calls that imitate injured rabbits. Bears sometimes are attracted to these.

Some hunters sit on a tree-stand, waiting for a bear to come to them, but because a bear may roam over many square miles, many successful hunters say it is best to cover lots of ground, moving slowly and quietly as you might do if you were still-hunting for squirrels.

Where baiting bears is allowed, you might want to consider giving this a try after checking specific regulations for the area you'll hunt. This tactic is most effective during spring hunting seasons but can work to the hunter's advantage other times of year as well.

A wide variety of bear baits can be used, but most hunters opt for a mix of several things. Combinations might include honey, bacon grease, fish, pastries, meat scraps, apples and peanut butter, to name just a few. And when possible, the hunter should obtain baits in quantity. Grocery stores are good sources of meat trimmings, restaurants often will provide old grease and food scraps, old pastries and doughnuts may be available at bakeries, and farms and orchards are good sources for fruits and vegetables not suitable for sale but very suitable for bear consumption.

The hunter should give in-depth consideration to the location of his bait station. Ask yourself, is there a blind location downwind from the bait? Are alternate locations available in other directions if the wind shifts? Is there thick cover nearby? (Bears rarely travel far from cover.) Is the bait likely to be found by other hunters? Is the locale easy to haul bait to?

Don't expect much action if you create your bait station just before the season opens. Where allowed, it's best to start baiting up to 30 days prior to the season in order to accustom bears to the bait. And remember, sometimes a bear takes weeks to cover its home range and encounter a bait site, so don't give up. Baits should be replenished at least once every three days to keep bears in the area.

Baiting does not guarantee you'll harvest a bear. A hunter sitting near a bait pile still must use all his hunting skills to increase the odds for success. Bears are typically very cautious when they approach a bait site, so the hunter must stay alert and watch very closely to avoid being caught off guard when a stealthy bruin appears, as many hunters describe it, "silently out of nowhere." Use the utmost stealth, moving quietly and cautiously, or a bear may leave before you ever see it.