How to Choose the Right Gear for Black Bear Hunting 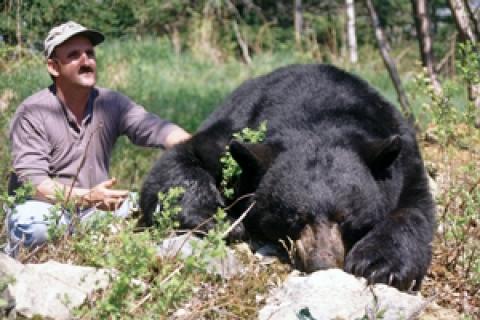 Selecting the right weapon for bear hunting is important, and knowing how to skillfully use it is even more important.

When hunting with a rifle, most experts recommend .30 caliber or larger. A .30-06 or 7mm Remington Magnum will do the job, but for more killing power, it may be best to use larger cartridges like the .300 Winchester Magnum or the .338 Winchester Magnum.

Remember, too, that black bears have a thick layer of fat and are tough to track if they get into heavy cover. For this reason, only premium controlled expanding bullets should be used. Bullets such as Swift A-frames, Barnes X and Trophy Bonded Bear Claws work very well. They reliably expand to twice their diameter while still retaining over 90 percent of their original weight.

Hunters using muzzleloaders should opt for a minimum of .50 caliber and fire a conical bullet or sabot. Many have excellent success with 370-grain maxi-balls propelled by 80 to 100 grains of FFG powder. Many bear hunts are conducted in constant rain, so proper precautions (nipple and muzzle cover) should be used, too. A take down tool and necessary cleaning supplies should also be included as it is recommended to clean and dry the gun each night before hunting.

Bowhunters shouldn't use anything lighter than a 50-pound bow and one with a 65-pound pull is even better if the hunter can accurately shoot it. The best arrows weigh at least 450 grains. Expandable broadheads can and do work, but fixed heads tend to be better for these heavy-boned animals. Even presharpened broadheads should be honed to a perfect razor edge to penetrate bears' thick hide, fat and muscle.

When you see a bear and are preparing for a shot, move slowly and quietly so you don't alert the bear to your presence. Bears are sensitive to sound and movement, and a rapid movement by an archer, a clumsily cocked muzzleloader or the snap of the safety on a modern rifle can send your bear bolting. If you frighten a mature bear in this way, chances are you'll never see that bear again. The bruin will either depart to some other food source or they will visit the area only at night.

Knowing where to shoot a bear also is important. Broadside and head-on shots are the preferred choices for gun hunters. A bruin hit in the shoulder blade area won't travel far. For head-on shots, aim for the center of the chest.

The best shot for archers is not a broadside shot, but one where the animal is angling slightly away. Try to place the arrow just behind the nearest shoulder, midway between back and belly. This gives a clear shot at the vital area without interference from the front leg or shoulder. Broadside shots behind the shoulder blade also will kill.

A bear's heavy fat layer prevents free external bleeding, making it difficult to track. For this reason, many bowhunters use a string tracking device. Available from archery suppliers, each consists of a spool of thread with the end attached to the arrow and the spool attached to the bow. The line plays out as the game flees, leaving a clear trail to follow.

When you find a downed bear, approach it cautiously. If possible, approach the animal's rear from uphill. If the bear isn't dead and is aroused, it's most likely to lunge forward and head downhill. If the bear shows any sign of life, finish it with a well-placed shot.

Bagging a bear is challenging, but most ardent bear hunters prefer it that way. To them, that obvious degree of difficulty is the reason for hunting. The hunt is a success whether they kill a bear or not, because they've faced the challenge and tried.

Still, the chance of success is always there. And every bear hunter hopes that maybe, just maybe, this will be their year to bag a bruin, one of North America's most magnificent and storied game animals.