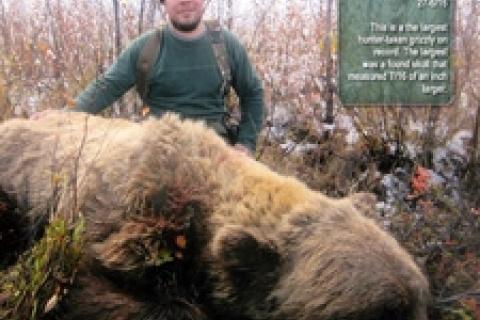 The Boone and Crockett Club recently announced a new No. 1 hunter-taken grizzly bear. This monster bruin was taken in 2013 by Larry Fitzgerald near Fairbanks, Alaska, and scored 27 6/16, missing the world record mark by just 7/16 of an inch (a bear found dead in Alaska in 1976). Bears are scored based on skull length and width measurements. If you think you're up to the challenge of pursuing these mammoth carnivores of the North, a good booking agent such as The Hunting Consortium or Jack Atcheson & Sons will connect you with an outfitter wherever you may wish to bear hunting. Here's a rundown of the top spots.

The first thing you need to understand if you wish to hunt these bears in the Land of the Midnight Sun is that Alaska has both brown bears and grizzly bears. After years of debate, biologists finally determined a number of years back that grizzlies and brown bears are basically the same animal, with those bears that live along the coast having developed into a sub-species simply based on growing to larger proportions due to their salmon-rich diets. Essentially, according to the Boone and Crockett Club, any such bear found along the southeast, south or southwest coasts, the Alaska Peninsula, or any island in these areas, is a brown bear; those found anywhere else in the state are considered to be grizzlies. If you are interested in the larger brown bear, please read Alaska's Giant Brown Bears, but this time we're focusing on grizzlies. It's also important to note that you can only harvest a brown/grizzly bear every four years in Alaska.

There are a few distinct areas to hunt grizzlies in Alaska, namely the interior stretching from western to eastern Alaska, the Brooks Range and the Arctic region. Bears from these various areas tend to vary a bit in size and exhibit different qualities to their coats, including color and thickness. Most outfitters offer both spring and fall hunts, with some good fishing opportunities often available in the spring and some great mixed-bag hunting opportunities to be had in the fall with the inclusion of moose, caribou, goats, black bears, wolves and wolverines. In fact, some outfitters only offer grizzlies as an incidental to these other species, so make sure you confirm this in advance if you're only after grizzly. Two outfitters to consider for interior grizzlies are Clearwater Alaska Outfitters and R&R Hunting and Outdoor Adventures. For Brooks Range bears, consider Deltana Outfitters, and for a gorgeous Arctic grizzly, consider Mountain Monarchs of Alaska.

The grizzly bears in the Yukon are known as mountain grizzlies, including the much-desired "silvertip" variety which makes one of the most impressive trophies in the hunting world. As in Alaska, spring and fall hunts are available, with multi-species combo hunts in the fall being a very popular option. Two outfitters with good reputations are Blackstone Outfitters and Yukon Big Game Outfitters.

Grizzly permits are extremely limited in B.C. and are often spoken for far in advance, so making arrangements early is crucial. British Columbia offers a couple of distinct areas to hunt grizzly bears, namely the coast and the remaining interior of the province. Coastal bears can be a bit larger, but the interior variety commonly sports the impressive "silvertip" coat. Coastal hunts are generally done by boat, much like brown bear hunts in Alaska, while interior hunts usually involve horses. Combination hunts are popular in the fall, and black bears are so numerous in B.C. that a black bear tag is usually included with a grizzly hunt in spring or fall.

Just about wherever you go, most hunts will run 8-14 days and cost roughly $12,000-$18,000, so these are not cheap trips. But for most of us, a grizzly is a once-in-a-lifetime hunt, and an opportunity to see some of the most beautiful and unspoiled land left on Earth.