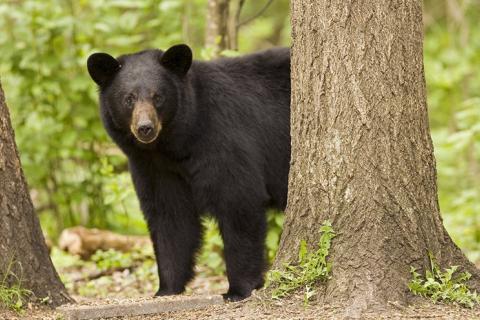 Bears like to travel lake shores, river edges, and tidal inlets near oceans. All of these habitats offer food in the form of grasses, insects, flowers, crabs, fish, and animal carcasses.

That makes boats a great transportation method for bear hunting, either to reach prime territory or to actually conduct some of the hunt from the watercraft.

Big boars like to use grassy beaches,” says legendary retired bear guide Wayne Wiebe, who once controlled two-thirds of the black bear and grizzly guiding rights on Vancouver Island. “Their stomachs have shrunk during the winter and grass is all they eat at first. The best areas for grass always hold the biggest boars. I’ve seen as many as seven large boars feeding at once on a single grass flat.”

After feeding on grass for a while, the bears switch to fireweed and other plants. By late spring and summer, berries begin ripening, adding another food supply. In fall they feed more on fish as migrating species like salmon return to inlets and rivers.

For lakes and tidal inlets, one of the best hunting methods in both spring and fall is to cruise slowly along shore, glassing and watching as far ahead as possible. When a bear is spotted, cut the motor and glass it for size and hide quality. Also analyze possible stalking routes if it’s a mature animal worth trying for.

Four Considerations Before You Go After That Bear Along Shore:

1. Besides watching along shore, also look up on mountainsides and hills nearby where you might find the quarry feeding or traveling. If the bear is a long distance off, be realistic in analyzing your chances for a successful stalk before heading after it.

2. If it’s going to take several hours to reach the bear, is it likely to still be in that location or nearby where you can get a shot? If not, or if it’s too late in the day, plan on being there earlier the next afternoon. Try to get closer where you can make a short stalk and be in range.

3. If food is abundant in that area, chances are the bear will be back out the next day. Patience pays in bear hunting rather than being eager.

4. If the cover is fairly open, though, and you think you can approach before the quarry ambles into cover, make the stalk. Check the wind before setting out and again periodically during the approach. Bears have great noses and you want to avoid being winded at all cost. Their vision isn’t too bad, either, so use all cover available as you sneak into shooting range.

On large inland rivers, float hunting is a great way to search for a bear in spring or fall, allowing you to cover lots of territory quickly. Watch along the river’s edge for bears feeding on plants, buds, fish, carcasses left by trappers, and winter-kill deer.

Seven Considerations Before You Go After That Bear on Inland Rivers:

1. Don’t ignore the distant hillsides and surrounding mountains, either. Often that’s where you’ll locate your quarry. We spotted over half the bears seen on a float hunt I took on Alberta’s Peace River away from the water.

2. You can do some glassing while floating along, but it pays to stop periodically in prime areas and thoroughly glass the surrounding countryside from a stationary position.

3. Sometimes, though, you’ll encounter your quarry at close range, right along shore. If the current is smooth and you feel comfortable with the shot, you can take the bear right from the drifting boat (where legal.) This is a bit risky, though, since the boat may wobble or rock right when you get ready to squeeze the trigger.

4. A better approach in most cases is to ease to shore before firing. You can try swinging in to the bank on the same side the animal is on, just downstream from it. This is risky, though. Intervening cover may block a shot, or you may spook the bear.

5. It’s usually preferable to quickly make a landing on the opposite shore and fire across the open water. This way you can have a clearer shot and watch what the bear does after you squeeze off, firing follow-up rounds when necessary.

6. If you’re hunting a deep, large river, sometimes you can float a few miles and then return to camp or your launching point at the end of the day. In most cases, though, it’s preferable to launch at one spot and have a take-out vehicle waiting at a downstream location.

7. The distance you float can range from 4-8 miles for a one-day trip up to 20 or 30 for a multiple day adventure. Just make sure the land along shore is open for public hunting or property where you have permission to hunt.

If you are new to river, lake, or tidal inlet hunting for bears, the best bet is to hire a reputable outfitter whose references recommend him or her highly. They will know the best stretches of water to cruise or float and have all the ancillary cooking, camping, boating and safety gear you need.

Any kind of bear hunting is fun. But pursuing bruins from a boat offers a special experience that every hunter should try at least once in their lifetime.

How to Choose the Right Gear for Black Bear Hunting

Gerald Almy has been a full-time outdoor writer for over 35 years, with articles published in over 200 publications. He has written hunting and fishing columns for many newspapers both in Virginia and Texas, as well as the Washington Post. He has written two books on fishing and contributed chapters to a number of hunting books. He has won many awards for his writing. In 2008, a feature he developed for Field & Stream and wrote for five years called “Best Days of the Rut,” was nominated for…
END_OF_DOCUMENT_TOKEN_TO_BE_REPLACED