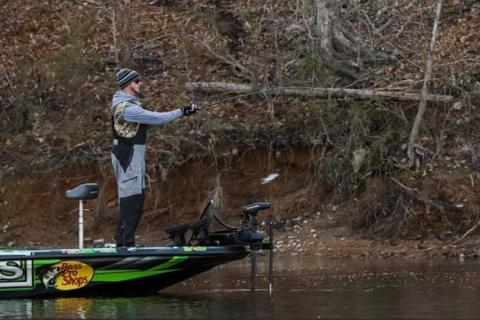 Once the ice finally thaws in Michigan, if Bassmaster Elite angler and NITRO Pro Team member Jonathon VanDam is home in Michigan, you can bet he’s going to trailer his NITRO Z21 to his favorite largemouth lake to seek them out. Of course, he’ll be careful not to damage his boat if there’s a thin layer of ice on the lake in the morning. That said, a little effort can go a very long way this time of year and chances are you’ll have your favorite body of water all to yourself!

Where to Look for Bass After the Ice Out

After the ice out, big bass migrations begin. VanDam looks for shorelines laden with rocks as they heat up the fastest and warm the water around them.

Next, he’ll try to find emergent vegetation. Green weeds just starting to grow are extremely productive as they hold the most oxygen, but last year’s dead weeds can hold fish as well.

He’ll idle and look for productive areas with vegetation with his Humminbird Solix units “I prefer the shorter grass because it’s fresher,” he said.

He’ll use both 2D sonar and Down Imaging to get the best picture. Once VanDam finds what he believes could be a productive area, he’ll continue to read the picture displayed on his Humminbird SOLIX 15 CHIRP MEGA SI+ G2 Fish Finder/GPS Chartplotter bow mounted unit to keep a pulse on what is going on along the bottom as he probes the area with variety of lures.

“Some of the places I like in the early spring are shallower spots that have darker bottoms- like lily pad stems,” he started. “A lot of times, largemouth are going to be tight to the bottom but they are a lot more active that you’d think they would be for being in cold water.”

Tip: Watch this video about the One Boat Network from Minn Kota and Humminbird.

Water Temps are Key to the First Signs of Bass Movement

As spring water temperatures change, the warmest parts of the lake are usually the channels and cuts where its shallower and there isn’t much if any flowing water. JVD will start there.

How to Catch'em the VanDam Way

Many times, he’ll slowly retrieve ¼- to ½-ounce Strike King Swim Jig in bluegill and shad patterns. He’ll pair that with a Strike King Menace Grub in the same color as the skirt for a trailer.

Because the grass has barely taken root during the early spring, VanDam favors a Strike King ball head jig instead of a Texas rig because he really has no worry of getting snagged up. Also, the exposed hook point allows for better hook penetration.

Most often, he’ll fish with a spinning rod since he’s dealing with smaller baits. He prefers a G-Loomis GLX JWR 892S spinning rod paired with a Shimano Stradic Ci4+ spinning reel.  Other times, he’ll for the softer action version of the rod in the IMX line as it can help when bass are especially finicky.

He also likes the feel and stretch afforded by fishing 8- or 10-pound Bass Pro Shops XPS fluorocarbon fishing line instead of running a braided line for a mainline.

VanDam doesn’t see the need to fish especially fast or slow- but he will be extremely thorough when fishing such areas.

“I’m kind of snapping those baits on slack line,” he started. “It looks like I’m moving the bait a long way- but I’m not. I’m snapping it through that stuff so that my bait doesn’t get buried in that grass as bad.”

Most times, VanDam admits that he doesn’t even feel the bite. Instead, when a bass has his bait, it will feel like a mushy dead weight.