Why You Should Target Shallow Bream for Largemouth Fishing 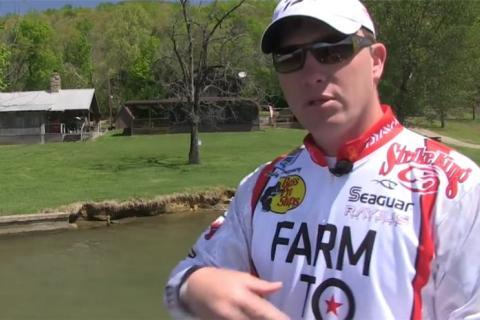 In the heat of summer during those sweltering days, conventional wisdom tells anglers to pull off the bank and head to deeper water.  According to Bassmaster Elite Pro Andy Montgomery, anglers are missing a key opportunity to dial in a whole other population of largemouth.  Enter- the bream a.k.a. bluegill connection.

“In the South it gets so hot that’s where the oxygen is- up shallow,” Montgomery started.  “Our thermocline starts rising and pushing the fish from the depths.”

Fun Quiz: Are You a Warm Weather Angler? Take This Bass Tactics Quiz & Find Out

Let’s get one thing clear- bluegill and bream are the same deal!

On a lake that doesn't have grass, Montgomery has found bream to spawn in some type of pocket in a cove off the main river or a bend in the bank- something that breaks the current. “They really like to spawn in sand but I have seen them spawn on red clay and hard bottom shells,” he said.

“If the lake has grass, they’ll spawn on the main lake because the grass will act as a buffer and break the current,” Montgomery started.  “The grass will provide the protection verses those bream that spawn in the pocket to protect them from current.”

But, grass is harder to fish.  He’ll put his trolling motor down and go looking. Using his mapping charts, he’ll seek out flats where the grass typically grows knowing that bream spawn in grass 3- to 5- feet of water.  “Once you get in there, you can look for openings in the grass.  There won’t be one little opening, there will be a big old hole the size of a boat which is what they will spawn on,” he said. 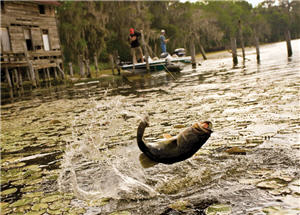 Montgomery believes there are two populations of largemouth up shallow that come into play.  One population are resident fish that hang out under docks, over hanging trees, or right in the middle of the bream.  Interestingly, when bream are not spawning, they will live in the same places as largemouth.

“The bass sit underneath them and don’t aggressively feed on them until something triggers them like an injured bream, or, once or twice a day they’ll run up and eat one,” Montgomery said.

The other scenario sees wolf-packs of 12 to 15 largemouth cruise the banks raiding bluegill beds or gorging on bluegills hiding under cover.

During the July and August, “the dog days of summer”, Montgomery will throw a topwater all day long.

Fish a Soft Bait In The Grass

When fishing matted grass, especially near bream beds, he’ll fish a soft bait like a green pumpkin Strike King Sexy Frog on a 7-foot rod medium/heavy Daiwa Steez-XT rod paired with an 8:1 Tatula CT reel spooled with 55-pound Daiwa Samurai braid.  The shorter rod allows him to work the frog to walk back and forth better.

If the fish are locked down, he’ll switch to an Okeechobee colored Strike King Slither Rig paired with a blue craw or green pumpkin Rage Bug.

While he’s been alternating between straight shank and EWG hooks, he reminds anglers to take all of the slack out and lean into them really hard when punching bats.  His punch rig set-up is an 8-foot Daiwa Steez Rod and Daiwa Zillion Reel, which he loves for its big handles that give him more power.  He’ll spool it with 70-pound Daiwa Samurai line and opt for 7:3:1 gearing.

Topwater Bait for Under Cover Largemouth

If largemouth are targeting bream that are relating to docks and trees, there is nothing he would rather be throwing than a topwater bait.  A Strike King Sexy Dawg fished on 40-pound Daiwa Samurai braid with a 15-pound monofilament leader on a 7-foot medium action bait cast rod is his first choice, his next being a Strike King KVD Splash Sr. in a blue gill pattern like summer sexy shad.  He’ll throw it on a 6’6 Daiwa Zillion Rod with a Daiwa Tatula bait cast reel sporting a 6:3:1 retrieve.

Montgomery suggests that anglers fish around overhanging trees and docks and cast to the edge if you can’t make a roll cast to put your bait underneath.